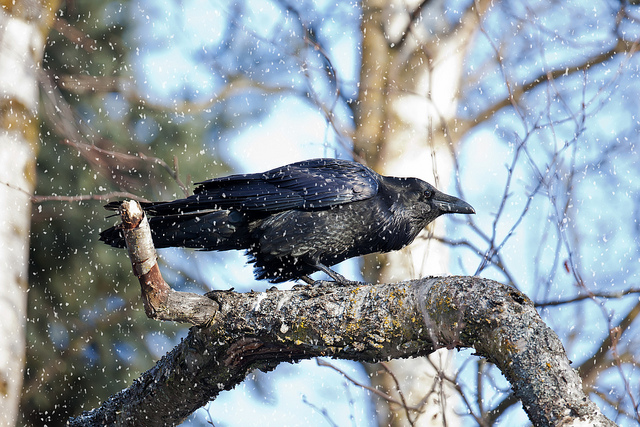 Ravens are hardy birds and remain in the Maryland region through the winter. Photo by Doug Brown, used under Creative Commons licensing.
Originally published by Village News, a publication of the community of Cabin John, MD. By October, most of the birds that breed here in the East have taken wing to warmer climes—South Carolina, Florida, the Caribbean, Central America, or even the Peruvian Amazon—to pass the winter in places where bugs, caterpillars, and fruits are still plentiful. Only hardy species remain behind, well adapted, by dint of feathers and extra fat, to cope with the freezing temperatures and fierce winds of winter. One of the pleasures of a crisp, clear November day in Cabin John is spotting a pair of large black birds roosting on the water tower’s railing at the top of the hill. Watching over us from the highest vantage point in our hamlet is the largest perching bird in the world—the Common Raven. When they fly off from their perch, it’s easy to distinguish the Common Raven from the ubiquitous crows of the neighborhood. Ravens are larger than crows and with a more robust bill, and a longer wedge-shaped tail. But it’s the vocalization that most memorably sets them apart: once you learn to recognize the Raven’s loud croak you will never forget it. And it’s a useful field ID to know: you can travel almost anywhere in the wilds of the northern hemisphere, from the coast of Siberia, to the slopes of Mt. Everest, across to Spain, and much of North America down to southern Mexico to find this species. The Common Raven has one of the widest ranges of any perching bird. In the United States, the Common Raven was once a bird of the wilderness, but it has over the decades made its way into areas where settlements are interspersed with forest. That this denizen of remote regions uses our water tower as a winter roost gives me great comfort: the Raven’s discriminating eye evidently sees wilderness worthy of occupation as close by as the shores of the Potomac and Cabin John Creek. It’s rare to see ravens inside the Beltway, so our pair are something special; perhaps not the first amenity a real estate agent recites in touting the benefits of “Cabin John living,” but a highlight to anyone who cares about nature. The first introduction many of us had to ravens was in Poe’s most famous poem. But his take, both melodic and macabre, made the talking bird a frightening subject. Along with other members of their family (the Corvids), crows, jays, and magpies, ravens may be the most intelligent of all birds and they have among the largest brains of any bird. The raven’s cultural significance is well established among tribes of Northwest Indians who consider the bird a god figure and trickster, perhaps in recognition of its cleverness, and include representations of it in their totems. I have also seen ravens in Bhutan, where it is the national bird and where the monarchs wear a crown depicting a raven. Ravens pair for life and are long-lived among wild birds, perhaps reaching 20 years of age. Their intelligence, wide global range, broad diets, and adaptability to a variety of habitats are some reasons why ravens, crows, the American blue jays, and magpies are so abundant. But Nature always has surprises in store. In 1999 the first instance of West Nile Virus (WNV) was recorded in the U.S. and the disease affected many bird species but especially hit hard were members of the Corvid family and many birds simply disappeared to the consternation of ornithologists. By 2002, WNV had become widespread in the eastern U.S. and for a while, it was hard to even find the once-ubiquitous crows, let alone a raven. Somehow, our neighborhood ravens survived, or their offspring did, or a new pair moved in to take the place of the departed. Either way, we should be delighted to have them back. And for the record, I prefer the wild raven’s deep croak—the sound of wilderness—to the talking version’s “Nevermore.”
biodiversity
birds
ecology
forests
wildlife