Skip to main content
Home   /   Blog   /   Resilient Design Can Ameliorate Extreme Storm Impacts
Variable climate patterns are predicted to be the new norm in today’s changing climate.  No longer can we rely on our normal precipitation levels or temperatures.  Models foretell increased storm frequencies and intensities as sea surface temperatures climb.  The impacts of climate change affect all of us and our planet’s rare fauna and biota.  Yet we often don’t appreciate the immense responsibility we hold until we’ve had personal experience with an extreme event. Working to build resilience to overcome the impacts of climate change is one of the goals of plant reintroduction and habitat restoration.  And thankfully our experience has been that our efforts do help make a difference.  Working with many land manager partners, Samuel J. Wright, a Field Biologist working with Fairchild Tropical Botanic Garden, has conducted 18 reintroductions of the federally endangered beach jacquemontia (Jacquemontia reclinata) into 12 sites evaluated as appropriate habitat within the historic range of the species.  One such reintroduction at Delray Beach in February 2005, coordinated by local Palm Beach, Florida (USA) landscaper Rob Barron, represents a reintroduction to a restored coastal strand habitat (Fig 1).  Because this species thrives in sunny open locations inland from the foredune, this reintroduction had a high probability of success. 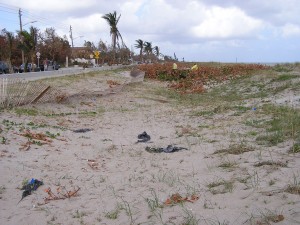 On November 4th, 2005, one week after Hurricane Wilma hit south Florida, Wright observed severe impacts of storm surge (Fig 2). Immense sand deposits buried some transplants and the entire sidewalk adjacent to the restoration site. All nearby trees and shrubs had brown leaves and dieback from wind and salt spray. A single event killed 48 of 133 transplanted beach jacquemontia. Thanks to the good topographic design of the restored site, the remaining living reintroduced plants and even some that had been buried thrived in the next six storm-free years. By 2011, a sea of beach jacquemontia could be seen at the site, flowering prolifically and helping stabilize the dunes (Fig 3). 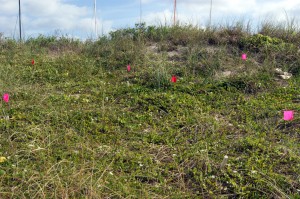 The importance of good site design and selection cannot be overstated for those hoping to create sustainable reintroduced rare plant populations.  Plant Reintroduction in a Changing Climate: Promises and Perils provides guidelines for site selection that are intended to improve the probability of reintroduction success.  Although one never can predict the impacts of extreme events, imagining that they may occur and using best reintroduction practice may help ensure a higher probability of population persistence.  We are continuing to track this beach jacquemontia reintroduction, as we are certain our opportunities to learn about resilience and sustainability in the face of climate change will continue to unfold.
climate change
conservation
restoration

Joyce Maschinski is the conservation ecologist leading the South Florida conservation program at Fairchild Tropical Botanic Garden. With Kristin E. Haskins, she is co-editor of Plant Reintroduction in a Changing Climate: Promises and Perils.