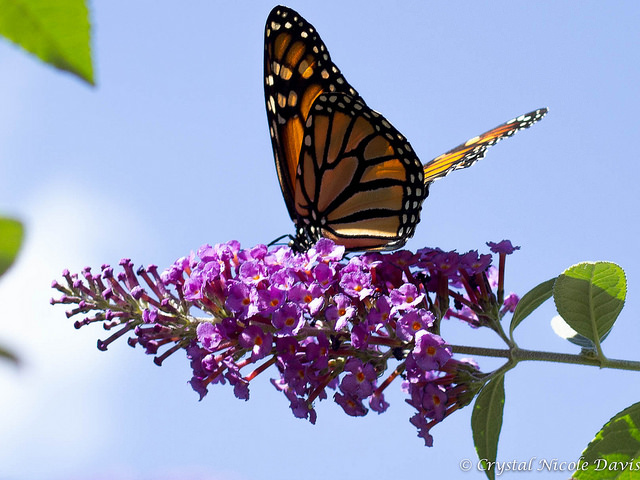 A monarch butterfly in DC. Photo by crystalndavis, used under Creative Commons licensing.
Originally published by Village News, a publication of the community of Cabin John, MD. For many of us, perhaps the first butterfly we were able to identify was the Monarch. They were our companions of summer with their bright orange and black wings floating over flower-strewn gardens, as if this Earth was indeed their dominion. In recent summers, though, the children of Cabin John and much of the eastern U.S. would have been lucky to see more than a handful. The Monarch (Danaus plexippus), once one of the most abundant butterflies of North America, has suffered a tremendous population crash over the past twenty years. On their wintering grounds in the highland conifer forests in the state of Michoacan, Mexico, as recently as 1996 they once numbered as high as 1 billion individuals. Since then they have plummeted to only 33 million counted in 2013. That may still seem like a lot of butterflies. But to put in perspective, imagine if the human population had declined by 92% over the same period! 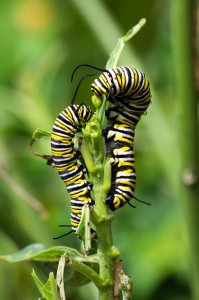 Monarch larvae. Photo by Nicole Castle Brookus, used under Creative Commons licensing.
There is so much beyond their beauty and their association with summer that is worth preserving; they have an important ecological role as pollinators of many flowering plants. Monarchs are also a wonderful example of mimickry, a relationship formed with the similar-marked Viceroy butterfly that we learn about in biology textbooks (although the textbooks need updating—see my column next month). Since Monarch females lay their eggs on milkweed plants, and milkweeds only, they depend on its availability throughout the range. The brightly striped larvae look like they have dancing shoes on, many pairs of them, and walk all over the leaves, ingesting the tissues loaded with cardiac glycosides that make the caterpillars and adults distasteful to almost all birds and other would-be predators. And then there is their intrepid migration, more on the order of birds than insects. Amazingly, some individuals fly as far as 3,500 miles from the northernmost part of the breeding range in the U.S. and Canada to their wintering ranges in Mexico. The trip back north is even more remarkable: returnees only travel part way before they lay their eggs on milkweed, often in Texas and neighboring states, and are replaced by a new generation heading further north to their ancestral point of origin. Often it takes five or six generations to reach our backyards from Michoacan, adding more drama to their remarkable story. 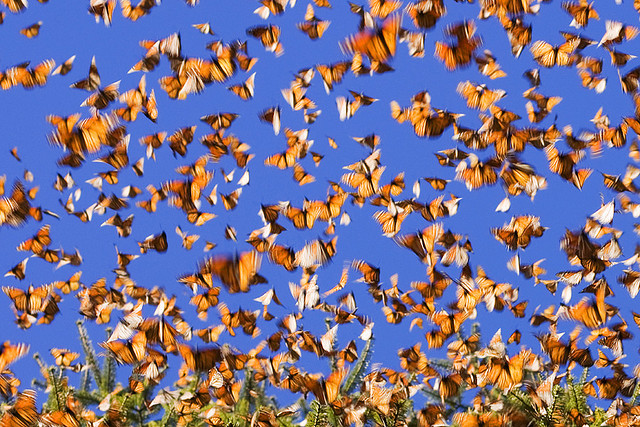 Monarchs are known for their impressive migration. Photo by Tarnya Hall, used under Creative Commons licensing.
For decades, ecologists north of Mexico pointed fingers at Mexican officials as responsible for the precipitous decline in monarch populations. They turned a blind eye, we said, to illegal clearing of the oyamel fir forests where the monarchs cluster in winter in great numbers and where poor villagers eked out a leaving through timber harvesting or rustling. But now, with these areas better protected, Mexicans have a right to point the finger back at the gringos. At a conference last February in Washington, DC, I was lauding ex-President Salinas for his country’s unparalleled biodiversity and the steps they had taken to protect it. Then I brought up the monarchs. Before I could say more he replied, “But it is American farming practices that are to blame for reducing the number of Monarchs.” And he is right. Conservationists, Mexican and American, attribute the disappearance of mikweed host plants to new agricultural practices in the Midwest—and along the Monarch’s main route to and from Mexico—where genetically modified seeds are bred to resist herbicides that eliminate milkweed nearby. Once established, the farmers can spray Roundup with abandon and kill any wild milkweed that lives between the regimented crop rows. Increased use of these genetically modified crop strains and herbicides in fields of the two most planted crops, corn and soy beans, are correlated with the steep decline in Monarch populations between 1999 and 2010. The leading expert on monarch populations, Dr. Chip Taylor, estimates the loss at 120-150 million acres of the monarch’s milkweed habitat across much of the cornbelt in the Midwest. The solution is to restore milkweed on a grand scale, to provide stepping stones, or way stations of “milkweed habitat” where returning generations can stop and breed as they make their way back north to us. There are several groups working nationally to spearhead this noble effort. What can we in our little hamlet of Cabin John do to restore monarchs to their rightful place? The first step is to be honest with ourselves. It’s not fair to blame just corn and soy bean farmers in the Midwest—we are a nation of Roundup users. So the first step is to stop using this dangerous chemical and other pesticides (including herbicides and insecticides) that kill a wide range of plants and beneficial insects and endanger our own health. (Pulling weeds is a chore; we have had great success with mixing a gallon of vinegar with a pinch of salt and a few drops of dishwashing detergent. If you drip the mixture on the offending weed’s root area it will be dead in a few hours, especially on sunny days. Try it!). 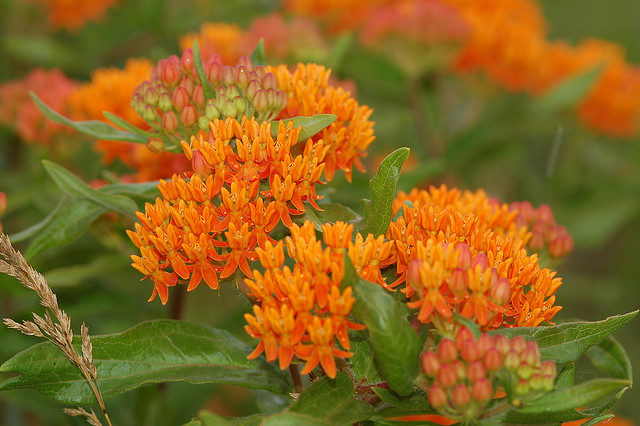 Asclepias tuberosa is one of the most popular milkweed species. Photo by squamatologist, used under Creative Commons licensing.
The second step is to get our own hands dirty—by planting milkweed to foster suitable habitat for Monarchs. Many neighbors already do this by planting the beautiful butterfly weed (Asclepias tuberosa), the showiest of the milkweeds. Its bright orange flowers are a magnet for many kinds of butterflies including nectaring Monarchs. Even better is for all of us in our yards to plant some common milkweed as monarch waystations. If you have never put your nose in a bright pinkish-green ball of common milkweed flowers (Asclepias syriaca), you have missed one of the most fragrant floral scents in nature. The perfume is intoxicating. The plant’s foliage may not be exceptionally attractive, but there are other milkweeds in the genus Asclepias, such as swamp milkeed, A. incarnata, obtainable in nurseries, that have attractive foliage and flowers. Even better, if you have never inhaled the fragrance from sand vine (Cynanchum laeve), also called honey vine or climbing milkweed vine, another member of the family, you have not experienced the joy of native gardening. For nearly six weeks of summer, sprays of small white vanilla and honey scented flowers attract pollinators by the score and are also hosts to monarch caterpillars. I have pods to give away to interested gardeners who would like a more ecologically beneficial and fragrant alternative to the destructive Chinese or Japanese wisteria or trumpet creeper vine. We can go further to ensure that future generations of Cabin John residents enjoy Monarchs by volunteering to do a bit of butterfly gardening. The noted writer Michael Pollan observed that, “a lawn is a garden under totalitarian rule.” But even some of our local gardens are so predictable: azaleas, rhododendrons, hosta, etc. etc. etc. What if everyone in Cabin John devoted 10% of their gardens to plants that butterflies need for nectar and their hungry caterpillars need for sustenance? We would shift from a lawn-dominated ecosystem to the East Coast’s first community butterfly reserve. Community spaces, like the Clara Barton school yard, the Cabin John shopping center by the side of the co-op, or even the new green strips along Macarthur Boulevard could be planted with butterfly plants that would add beauty and color to our neighborhood roadway and wouldn’t need mowing. The natural vegetation of this part of Maryland is forest and the only way to suppress its return to your yard is through chemicals, mowing, and weeding. Why not reduce the chemicals, fertilizer, and mowing by, at least in a small section of your yard, giving the Monarchs a chance to be your neighbor once again? At least nationally, the Obama administration is with us, appointing a task force to address the decline of the Monarch butterfly and avoid the necessity of listing it as an endangered species. Monarchs won’t go extinct as a species but the spectacular phenomenon of this long-distance migration by the eastern population might disappear in our lifetimes. Picking up a dozen milkweed plants at the nursery and giving them a sunny spot in our gardens will provide food and a home for these most attractive natives. And if every yard would hold some milkweeds we should soon be able to see the graceful dance of the Monarchs once again.
biodiversity
connectivity
habitats
insects
migration
plants
pollination
wildlife