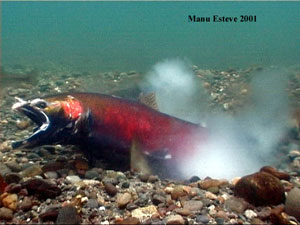 Pacific salmon are the iconic temperate rainforest species connecting ocean, freshwater, and terrestrial systems, and joining people to the great outdoors. They are a keystone species, on the menu of American bald eagles and grizzly bears of the Great Bear Rainforest, coastal wolves of Alaska and British Columbia, and millions of people that depend on healthy fish runs in the clean, cool water that salmon thrive in. Even their decaying spawned-out carcasses play a vital role in the circle of life, providing fish fertilizer for streamside trees whose roots soak up life giving nutrients.

Ironically, all is not well in the Salmon Nation with 214 of 400 at risk fish runs and 106 already extinct according to 1991 data from the American Fisheries Society. Salmon are circling the drain due to: overfishing; logging and road building that choke spawning beds with murky sediments; livestock grazing that removes streamside vegetation providing important shade for fish; fish farms that compete with wild runs; and dams–lots of dams–nearly 90 large ones in Oregon, Washington, and Idaho that stand in the way of ancient salmon migrations.

With all the attention paid to salmon, you would think that their role as the quintessential rainforest icon would play well in bringing them back from the brink even in these fiscally conservative times. Here are just a few examples of where economists have placed a high value on restoring wild salmon runs:

Often these benefits outweigh costs associated with reduced agriculture or forestry production as in the case of the Klamath River where conservation benefits outweigh costs by a factor of nine, and in Washington where improved logging practices would generate more than $1 billion in net assets annually. This includes improvements to water quality, flood abatement, and tourism. Salmon are also a cultural icon with deep spiritual ties to Native American communities that celebrate their return annually with rituals handed down from one generation to the next.

But there’s something really fishy going on–and not in a good way–in Washington D.C. where congress is poised to zero out funding for popular fish and wildlife programs including those on the Klamath and San Joaquin rivers. The House of Representatives just passed H.R. 1: Full-Year Continuing Appropriations Act that attaches scores of anti-environmental riders that have little to do with the intent of the legislation but are designed to fish gut popular programs. While the bill heads to the Senate for a vote this month, conservation groups are scrambling to strip these dangerous riders from the bill while taking stock of what is at stake. The fate of salmon may just depend on how severe these cuts will be to one of the nation’s premier rainforest species.