Skip to main content
Home   /   Blog   /   Rise of the Superbugs
Last week, the World Health Organization (WHO) released a sobering report on the rise of antibiotic-resistant bacteria. Two main messages are unmistakable: The specifics of Antimicrobial resistance: global report on surveillance 2014 are even more sobering, showing individual drugs losing their power and bacterium after bacterium becoming 'superbugs.' For example, a major cause of infections picked up by people in hospitals is a nasty bacterium called Klebsiella pneumoniae. It causes pneumonia, bloodstream infections, and deadly illness in newborns and patients in intensive care. The bacterium, according to the WHO report, is present in every country. In some areas, more than half infections don’t respond to antibiotics because the bug has become resistant. Fluoroquinolones are a class of frontline antibiotics commonly used to treat urinary tract infections cause by E. coli. When first introduced in the 1980s, these antibiotics were universally effective. But again, now more than half of urinary tract infections in some countries do not respond to fluoroquinolones because bacteria have developed resistance. Third-generation cephalosporins, which are a last-resort treatment for gonorrhea infections, are now failing some patients in Canada, France, Japan, and many other countries. According to the American Medical Association, more than 100 million cases of gonorrhea occur every year wordwide. In 2011, it was the second most commonly reported notifiable infection in the U.S. (notifiable infections are those that legally must be reported to health authorities), with more than 300 thousand cases. Over the years, it has developed resistance to each type of antibiotic use to treat it: to sulpha-based drugs in the 1940s, to penicillins and tetracyclines in the 1970s and 1980s, to flouroquinolones by 2007, and now, to the only class of drugs left to treat it: cephalosporins. Antibiotic resistance doesn't just make infections harder to treat: it also lets bacteria kill faster. People infected with MRSA, an antibiotic-resistant staph, are 64 percent more likely to die than those with a non-resistant form, according to the new WHO report. The bug kills more than 15 thousand people in the U.S. each year and tens of thousands more each year worldwide. Although mostly concentrated in hospitals, MSRA is also commonly found in prisons, athletic settings, military barracks, and schools, and it is becoming more common: in some settings, more than 90 percent of staph infections are resistant. Although antibiotic overuse in hospitals and other medical settings has promoted resistance in many bacteria, other resistance, especially in bacteria that cause food poisoning, can be traced to agricultural overuse of antibiotics to promote faster growth in livestock other animals. These bacteria become resistant through constant low-level exposure to antibiotics. If a person then consumes undercooked meat or other products contaminated with such a bacterium, they can develop antibiotic-resistant food poisoning. Although antibiotic resistant infections are well established and becoming more common around the world, people can reverse the tide by using antibiotics judiciously. Only use antibiotics when prescribed and always complete the full course of treatment even if symptoms have eased. Healthcare workers can help by better infection prevention and control measures and by prescribing antibiotics only when truly needed. Policymakers can help by more carefully regulating their use, especially in livestock, and by strengthening the capacity of laboratories to track and identify these threats. The increasing antibiotic resistance highlighted by the WHO report joins mad cow, HIV/AIDS, Lyme disease, and a host of other ecodemics either caused or exacerbated by human activities. And what people cause, they can undo. 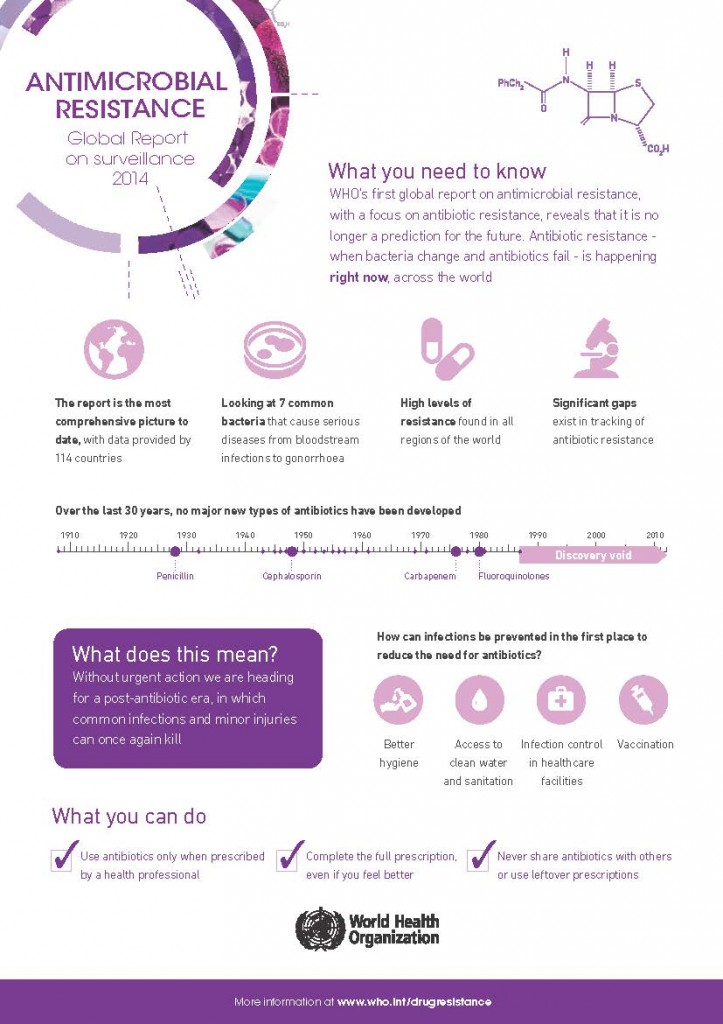 Mark Jerome Walters is a veterinarian, a journalist, and a professor at the University of South Florida St. Petersburg. His books include A Shadow and a Song, Seeking the Sacred Raven, and his latest, Seven Modern Plagues.