Skip to main content
Home   /   Blog   /   Smartphone Apps for Bike Advocacy
Adapted from the Alliance for Biking & Walking’s blog. With mapping technology and internet connectivity at our fingertips, it's never been more possible to collect reams of information about how individuals travel and engage with active transportation. 58% of American adults own smartphones, according to Pew Research, and this number is increasing. A few Alliance member organizations have already taken advantage of this trend. The Washington Area Bicyclist Association created their own app to empower bicyclists in the greater DC area to collect vital information in the event of a crash; the data are submitted to WABA and becomes a basis for enforcement-related advocacy. Farther north, the Bicycle Coalition of Greater Philadelphia has worked with civic hackers to create bicycle activity maps, a bicycle counting app, and, most recently, crowdsourced maps of where Philly bikers ride. New Hampshire has taken a different approach: Tim Blagden from the Bike-Walk Alliance of New Hampshire paved the way for the Department of Transportation to purchase Strava data. A recent Alliance for Biking & Walking webinar, which you can watch on their site, discussed these three apps in more detail. Here's some background on the WABA project: For years, the Washington Area Bicyclist Association has been helping area bicyclists who have had the misfortune of being involved in a crash. Even before WABA developed an app, they handed out a pocket guide to DC's bike laws, complete with a page on what to do in case of a crash. They also added a bicycle crash reporting form to their website, which feeds directly into their Salsa database and helps the organization track crash trends and common police responses. Advocates held seminars on what to do in case of a crash and coached individual riders who faced post-crash issues. According to webinar panelist and WABA advocacy coordinator Greg Billing, the organization always wanted to create a mobile app to collect more data. When the New York Bike Lawyers came out with a simple crash app, WABA reached out to ask about how it worked and who built it. Greg's team struck a deal with the same developers, and the WABA app was born. 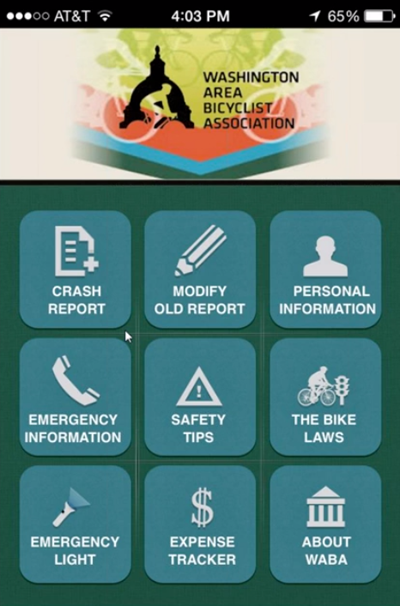 A screenshot of the WABA crash app on iPhone. Image: Greg Billing
WABA's app helps users record all the right information about a crash (and submit that information to WABA), log their exact location, and take notes and photos. It also includes safety tips and a DC bike law guide. About 1,000 people have downloaded the WABA app for both Android and iPhone. Thanks to user-submitted crash data, WABA has a better understanding of the biggest issues with police enforcement. For example, advocates learned that police commonly misuse the "riding abreast" law in DC. These data have helped WABA collaborate with the police department to improve enforcement and highlight compelling stories for media coverage and official testimony Editor's note: We highlighted the WABA portion as proud DC residents to give you a taste of the discussion, but head on over to the Alliance's website to watch the full webinar and read more about the Philly and New Hampshire apps.
bikes
cities
technology
transportation
urbanism