Skip to main content
Home   /   Blog   /   Temperate Rainforests Down Under Owe Existence to Ancient...
Some 38-45 million years ago, Australia broke off from its parent super-continent, Gondwana, and began drifting northward.  In its long and arduous journey, the ark rafted ancient species forced to cope with a cooling and drying climate. Some, like Antarctic beech (Nothofagus spp.), were forced into climatic refugia along the eastern edge of Australia where it remained moist enough to cradle the evolution of rainforest communities in changing times. 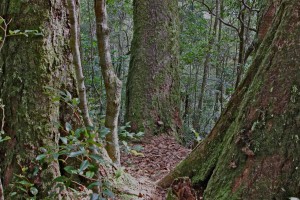 This December, I had the pleasure of walking in the shadow of ancient beeches in Queensland, Australia, where I witnessed first-hand these and other magnificent rainforests. Here’s what I saw: Antarctic beech forests are relicts of a bygone era restricted to windward slopes that squeeze moisture out of rising air masses coming from the South Pacific. The tapestry of life is a delicate balance of plants jockying for position based, in part, on changes in moisture determined by slope, elevation, and distance from the prevailing winds. As winds blow downslope on the north side of mountainous areas, rainfall and humidity levels drop while temperature rises. Plants are shuffled about from temperate to subtropical wet, subtropical dry, and wet or dry Eucalypt communities. While beech forests have lower levels of overall species richness, their connection to this ancient ark is unmistakable and globally significant with genera shared by trees and other plants in southern temperate rainforests of Valdivia (Chile), South Africa (Kynsna-Tsitsikamma), and New Zealand. The Antarctic beech that I observed arose from a process known as coppicing – repeat dying and growing of tree stems from a single seed that may have sprung some 2,000 years ago.  Ancient trees continuing what their ancestors started millions of years ago in a delicate dance with climate. 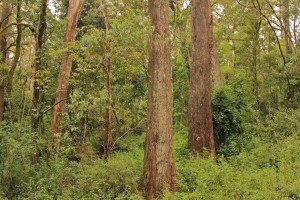 Wet Eucalypt forest in the Bunya Mountains of Queensland, Australia, remain unprotected because they are not considered rainforest. Photo credit Dominick DellaSala.

Equally fascinating was the shift from temperate to subtropical to wet Eucalypt. Along this gradient, was a noticeable explosion in the chorus of bird songs (sometimes pleasantly deafening), all kinds of ferns, numerous epiphytes, and long-dangling lianas that conjured up images of the mythical Tarzan. In my walks – both on the ground and along canopy bridges constructed along some walkways – I was greeted by lyre-birds, parrots, colorful pigeons, bush-turkeys, whip birds, bell birds, fantails, gray goshawks and much more. I was especially interested in the mixing of subtropical and wet Eucalypt elements and how fire dictates whether Eucalypt – a fire tolerant species – wins in this battle for supremacy – or rainforests eventually overtake giant gum trees (some were over 50 meters tall) when fire is absent for long periods. And none of my blogs would be complete without a call for conservation action. Australians – like so many other nations in Oceania – have nearly erased this pre-historic heritage. Most of the forests were cut down over a century ago but fortunately over two-thirds of the remaining native rainforests are now protected. The remaining battles persist over logging of Eucalypt (giant gum trees) – considered rainforest in my book and by other authors – but not by government protections. The hot spot of logging is in Tasmania; however, the government recently reached an agreement between conservation groups and industry to transition out of native forest logging. Last September, I was joined by 12 other co-authors of the temperate-boreal rainforest book in congratulating the Australian and Tasmania governments on this conservation milestone urging them to get on with the business of designating and then protecting remaining native forests including wet Eucalypt in Tasmania. In the current era of human-caused climate change, there are few opportunities for rainfall-dependent species to find refuge as the climate moderates and rainfall patterns change. The best hope is to reduce stressors on rainforest communities from human activities so that rainforest species have the best chance of adapting to human-caused climate chaos. This includes implementing the terms of the native forest agreements in Tasmania with new protected areas and facilitating connectivity along gradients to allow species to migrate. It is my hope that the Tasmania forest agreements are a signal to the rest of Australia, if not the world, that we can work together to protect the best of our natural heritage while restoring the rest. To do otherwise, would sink this ancient ark. Dominick A. DellaSala is chief scientist and president of the Geos Institute in Ashland, Oregon, and president of the North American section of the Society for Conservation Biology. He is the author of Temperate and Boreal Rainforests of the World: Ecology and Conservation.
Australia
biodiversity
climate change
forests
global warming