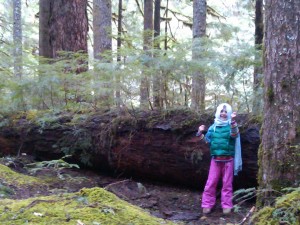 My 6 year old daughter, Ariela, standing alongside a "nurse log" - will her generation marvel in coastal rainforest giants?

There is no doubt that the Olympics of Washington State are ground zero for temperate rainforests--but are all the forests really “forests” in an ecological sense? As you know from my previous blogs, there are big differences between old-growth rainforests and the plantations replacing them. This is apparent on the Olympic Peninsula or in Alaska or most other rainforest regions that I have been writing about. The windward slopes of the Olympics receive over 140 inches of rainfall a year.  Abundant rain and productive soils allow Sitka spruce to tower over 300 feet and live for 700 years or more, world champions for their species in age and height. A casual stroll through this Olympian rainforest reveals just how rich it is from the ground up. On the ground, “nurse logs” in different stages of decay are covered with tree seedlings with roots affixed to decaying bark. Many of the oldest trees have a tripod appearance to exposed roots, evidence of nurse logs that have since been erased by forest decomposers with the roots firmly fixed to where a nurse log once provided support. The ground cover, a verdant carpet of mosses, ferns, and lichens, is soft, spongy, and wet. Wood sorrel, skunk cabbage, candy stripe, and trillium are but a few of the bountiful wildflowers. Stout branches of big-leaf maple are covered with layers of moss that weigh over a ton when wet. The thick mosses also provide nesting platforms for a threatened coastal seabird, the marbled murrelet. It takes over a hundred years for moss mats to reach the right thickness for this old-growth dependent species to use as nesting platforms. Epiphytic licorice ferns penetrate the thick moss cover and are restricted to growing in the tree canopy. Salamanders, tree voles, and flying squirrels sometimes live out their existence in a single-tree- top, which offers a microcosm of the rainforest ecosystem. The flying squirrel, in turn, is nature’s Johnny Apple-seed, coming down to the ground level and digging up the truffles (spore-producing structures) of mycorhizzal fungi. The spores pass harmlessly out the squirrels’ other end and propagate fungi throughout rainforest soils. The hyphae (threadlike filaments forming the mycelium of a fungus) then coat the roots of host plants and are responsible for an avatar-like network that allows the host to absorb nutrients and water. The squirrel, in turn, is on the main menu of the threatened northern spotted owl. Nothing in these rainforests is wasted! The profusion of tree farms growing on these slopes is very different from their rainforest predecessors. The Olympic Peninsula is the home of one of the most heavily fragmented temperate rainforests on earth. I have flown over and driven by its clearcuts many times. Last week, while driving on Highway 101, I couldn’t help noticing the road sign: “State Trust Lands – Managed with Care.” In almost Orwellian fashion, just down the road from this sign was a large clearcut where rainforest vegetation was stripped to the bone, leaving just a few spindly trees.  Managing state lands or any other rainforest land with care requires much more than leaving a few trees where a forest once grew. Webster’s definition of a trust is “interest held by one person for the benefit of another.” In this case the state would argue (as it has with road signs near cut-over and replanted forests) that the income from such practices is needed to pay for hospitals, roads, and schools. What’s missing from this trust is the calculation of true costs of managing the land this way in reduced water quality, declining salmon populations, threatened wildlife, and carbon dioxide pollution. The state’s antiquated notion ignores the full suite of values and services that intact, old-growth rainforests provide. 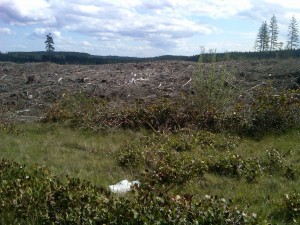 Clearcuts like this have nearly replaced the Olympian rainforests - is this what "managed with care" means?

The near destruction of the Olympic rainforest has been underway for decades. It has been slowed by the Northwest Forest Plan, but new logging proposals that would turn trees into biomass for fuel production as well as continued logging on state and private lands continue to chip away at the rainforest’s ecosystem benefits. If the Olympic rainforest is going to survive as a functional living ecosystem, the last remaining old-growth rainforests need to be taken off the chopping block.  Then perhaps we could have new state signs that read: Will today’s seedlings become tomorrow’s coastal giants? Will children marvel at the rich life these rainforests hold? How has an old-growth rainforest helped you today? And finally, maybe one day we will see a sign alongside an old-growth rainforest that simply says: TGIF! Thank God, indeed, It’s Forested.
Dominick A. DellaSala is chief scientist and president of the Geos Institute in Ashland, Oregon, and author of Temperate and Boreal Rainforests of the World: Ecology and Conservation.
biodiversity
ecosystem services
forests
rainforests