Skip to main content
Home   /   Blog   /   Thank a National Forest Roadless Area
The next time you turn on the tap, chances are the water came from a local National Forest. National Forests provide drinking water for about 60 million Americans nationwide and about 15 percent of the nation’s freshwater runoff. This clean water is worth an estimated net value of $27 billion annually. And the cleanest of this water comes from watersheds free of roads and development. 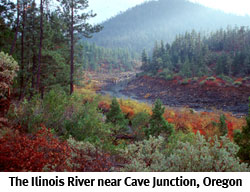 Known as Inventoried Roadless Areas, these pristine areas are each larger than 5,000 acres and collectively make up about one-third of the National Forest land base (58.5 million of the 193 million areas). They provide refuge for countless fish and wildlife, many of which are threatened with extinction, contain old-growth forests and many other native plant communities, and they purify drinking water among other benefits. In fact, over 900 roadless watersheds nationwide are source areas for facilities that treat and distribute drinking water to the public. Cities like Denver in Colorado, Portland, Bend, and Ashland in Oregon, obtain at least some of their drinking water from surrounding roadless watersheds. When roads are built into watershed areas, water quality, and fish and wildlife habitat is harmed. This is because the road prism, an area of ground containing the road surface, cut and fill slope, acts as a conduit for transporting sediments to nearby creeks. Too much sediment in streams pollutes drinking water and chokes salmon spawning beds. The ensuing water quality damage also comes with economic costs from collapsing road beds, and dredging of reservoirs to increase capacity and channels to enable navigation. For instance, Salem, Oregon spent approximately $100 million on new treatment facilities after logging in upper watersheds created conditions leading to mass sedimentation in its watershed following storms in 1996. The city of Seattle deferred a $150 million filtration plant expenditure through an intensive watershed rehabilitation program that will decommission 300 miles of road over a ten-year period, fix road erosion problems, and limit access and high-risk sedimentation/fire activities within their watersheds. The bulk of the nation’s roadless areas are west of the Rockies, and many are in the rainforest regions of Alaska. Take for instance, the Chugach National Forest—the nation’s second largest national forest—with nearly 5.6 million acres encompassing the Kenai Peninsula, Prince William Sound, and Copper River Delta. This National Forest is managed primarily for recreation and fish and wildlife habitat, including the only example of boreal rainforests in the United States. Nearly all of the Chugach is undeveloped and roadless. Its clean water acts as a wellspring for iconic salmon, the base of the food chain for hundreds of species, including grizzly bears and bald eagles. Further south, on the nation’s largest National Forest—the Tongass—there are nearly 5,000 miles of roads crisscrossing this rainforest, particularly on Prince of Wales Island. The island has many of the most productive old-growth rainforests on the Tongass and, correspondingly, the highest road density in the Tongass National Forest. Here road building and logging has created a patchwork of alternating clearcut and roadless old-growth rainforest areas. Continued logging could eventually lead to the situation in the Pacific Northwest where water quality has been degraded by roads and salmon populations are circling the drain. In the coming months, several court and administrative decisions could affect the Roadless Conservation Rule that provides protections for National Forest roadless areas. Some decisions already have been made that alter this landmark conservation rule. For instance, in Idaho a federal judge recently granted a state-filed exemption to the rule that provides increased protections for some areas while opening others up to mining and other developments. The state of Colorado also submitted a petition to the Obama administration to open up millions of acres in federal roadless areas for ski area expansions, coal mining, oil and gas leasing, logging, and other developments. Conflicting court rulings in the lower courts over interpretation of the Roadless Conservation Rule will soon be decided in a case pending in the Tenth Circuit Court of Appeals. In the meantime, millions of Americans drink clean water from their faucets never realizing where their water comes from or how it is affected by logging and road building. When it comes to clean water, here’s to roadless areas.
conservation
forests
roads
water
watersheds