Skip to main content
Home   /   Blog   /   Thanksgiving: Are we eating it all wrong?
This Thursday, Americans will gather around family (and football) to anoint a succulently roasted bird the grand symbol of our venerated Thanksgiving tradition. We will eat dishes in honor of that first harvest festival in 1621. Cranberry sauce, stuffing, rolls, pies, and, of course, honey-hued turkeys are the dishes we Americans will enjoy, as they were enjoyed by the Pilgrims and the Wampanoag almost 400 years ago. But I wonder if we are confused about what, exactly, our Thanksgiving tradition honors. I don’t mean to ruffle the feathers of the those who insist on turkey for Thanksgiving, but historians speculate that it was duck, or even heath hen—so numerous around Plymouth at the time—and not wild turkey that the Pilgrims and Native Americans feasted on in 1621. Even if turkey was served, historians argue, it was certainly not the showpiece of the feast that it is today. Instead, the Pilgrims’ oohs and aahs were reserved for the five white-tailed deer brought by the Wampanoag. 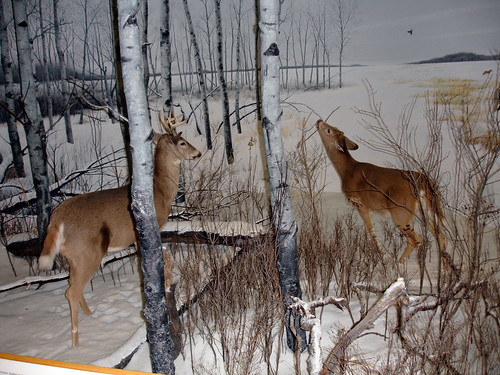 White-tailed deer (cc) Flickr user daryl_mitchell
Actually few of today’s popular Thanksgiving dishes graced the tables of that first celebration. Not only was turkey absent, but so were potatoes and wheat flour. That means no bread stuffing, rolls, mashed potatoes, or pies. Cranberries were most certainly present, as the fruit is native throughout New England. But there was neither sugar nor honey to make a cranberry sauce. (Sugarcane is a tropical plant that wouldn’t survive the bitter New England winters, and honeybees were introduced from Europe by later settlers.) What were on those tables in 1621 were foods our first settlers harvested from their colony: cabbage, squash, onions, beans, maybe peas, and likely blueberries, raspberries, wild plums, American gooseberries, various nuts, and even tubers like hopniss. And it was because of the abundance of these foods—those that the Pilgrims harvested from their immediate environs—that they could live through that first winter. Thanksgiving in 1621 was a celebration of survival as much as it was a way to give thanks for the help of the Wampanoag and the bounty of Plymouth.

The First Thanksgiving, Jean Louis Gerome Ferris (cc) Wikimedia Commons
Which means, at least to me, Thanksgiving isn’t so much about trying to recreate dishes we think were enjoyed by the Pilgrims centuries ago, but about dishes made from the food we are able to pluck and cull ourselves. In other words, I want to give thanks to the bounty of food I am able to harvest from my own community. But today’s system of food production and distribution makes it almost impossible for a community to gather food themselves from their own colony, so to speak. Where can one readily gather the nuts and fruit, herbs and vegetables to make Thanksgiving dishes the way the Pilgrims did? Gathering ingredients from the grocery store is a poor manner of honoring that 1621 harvest festival.

Norman Rockwell, Freedom From Want. Norman Rockwell Museum
Thankfully, a few American communities are changing the way we procure food, by growing it in and around our most peopled civic spaces. Public produce—the cultivation of fruits and vegetables, nuts and herbs in plazas, parks, and in the landscapes surrounding our public buildings, for anyone to harvest—means some of us can gather ingredients for dishes that more closely recreates the First Thanksgiving. Squash and peas proliferate the planters around City Hall, in Provo Utah, thanks to the dedicated green thumbers in the municipality’s Planning Department. In Davenport, Iowa, the municipality’s arborist has planted pawpaw, pecans, and hickory nuts along streets and throughout public parks. In Montpelier, Vermont, beets, kale and chard can be plucked from the lawn surrounding the historic State House. I may not be able to gather cranberries here in California, but I don’t necessarily wish to. Walking down my street and through my parks, I can harvest meyer lemons, bay leaves, rosemary, and fennel. And to me, that is the best way to honor our uniquely American tradition: with dishes made from the foods that abound in our particular communities this time of year.
cities
food
planning
Thanksgiving
agriculture