Post by Amy Nelson of Biohabitats, cross-posted from Rhizome with permission. It is true that in nature, species come and species go. On rare occasions they even return. Just this spring, a globally rare plant, Lobelia boykinii (Boykin’s lobelia), resurfaced in Delaware, a place in which it hadn’t been seen for over a century. 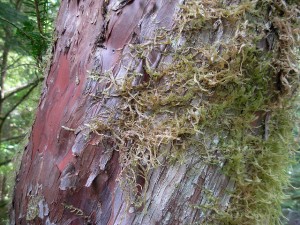 The bark of the pacific yew is the subject of cancer research. Photo by brewbooks, used under Creative Commons licensing.

Scientists say that species extinction occurs naturally at a “background” rate of one species per one million species per year.  But add in human influences and that rate accelerates. A lot. As in 1,000 to 10,000 times. According to the United Nations Environmental Program, this translates to the loss of 150 to 200 species every 24 hours. And when threatened species include yew trees whose bark contains high concentrations of a compound used in fighting cancer, or reef-building corals that help protect warm water coastal communities from storm surges, the link between the fate of other species and our own cannot be denied. In fact, many researchers believe we are in the midst of a sixth mass extinction. Despite all of this, people around the globe continue to work to protect plants, mammals, birds, fungi, amphibians, invertebrates, and marine species from extinction. Yes, despite the doom and gloom, this year we celebrate the 50th anniversary of the IUCN Red List and the 41st anniversary of the passing of the Endangered Species Act. These landmark initiatives have prevented thousands of species from going extinct. As threats to biodiversity mount, so does something else: the resolve to do something about it. In the current issue of Biohabitat's Leaf Litter newsletter, we take a look at some of the people and organizations deeply involved in the protection of threatened species. In doing so, we examine our own role in the protection and regeneration of biodiversity in the face of mounting threats. Editor's note: The newsletter includes a fascinating inside look at the IUCN Red List, an exploration of how advocacy groups work with the Endangered Species Act, and an armchair trip to the Mediterranean, among other interesting reads--check it out!