After two years at home, sitting in a darkened room trying to make sense of research notes, wrestling slippery arguments into a book, I took the show on the road, spending half of April travelling around the US. It felt great to be out in the open, breathing in crisp spring air, talking to strangers. (Thankfully, my ability to converse with real live people had not been lost during my exile.)

I had a blast, and those who attended my talks seemed to enjoy themselves, too. Mountain-bike pioneer Otis Guy said my talk was “awesome,” which, to my English ears, is just about the most American word in existence. 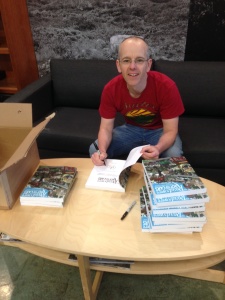 Otis attended the talk I gave at the Marin Museum of Bicycling in Fairfax, California. I was chuffed with the high turnout at this venue – 70+ folks paid ten bucks a head to listen to me wittering on, raising $900 for this great new museum. Roads Were Not Built For Cars majors on the on-road campaigns of cyclists in the 1880s and 1890s but I’ve got a personal interest in the formation of off-road cycling in the 1970s and 1980s, and those at my talk were mountain biking royalty (Fairfax was at the epicentre of mountain biking as it coalesced in the 1970s). It was a huge honour to present in front of the likes of MTB pioneers Joe Breeze, Jacquie Phelan and Marc Vendetti (Charlie “Repack” Kelly even poked his head in afterwards).

The tour had kicked off in New York City, at the NYC Velo bike shop, and ended in San Francisco, at SPUR. In between I gave a talk in a rural auction room (Copake, New York State); a pub (Smith Public Trust, Washington, D.C.); and a regional bicycle advocacy HQ (Velo Quebec, Montreal).

I also spoke in front of the Congressional Bike Caucus in a committee budget room in the Cannon building, opposite the Capitol in Washington, D.C.

OK, it was cool to talk in such politically-elevated surroundings but you know what else was cool about Washington, D.C.? I got to meet everybody at Island Press. All. At. Once. I gave a “brown bag” presentation in the Island Press board room. Up until this meeting I’d not met any Islanders in the flesh – the negotiations for the rights to my book had taken place on Skype, from my darkened writing room. It’s good to get out.

Carlton Reid is the executive editor of BikeBiz magazine, a publication for the bicycle trade based in the UK, and author of Roads Were Not Built for Cars.