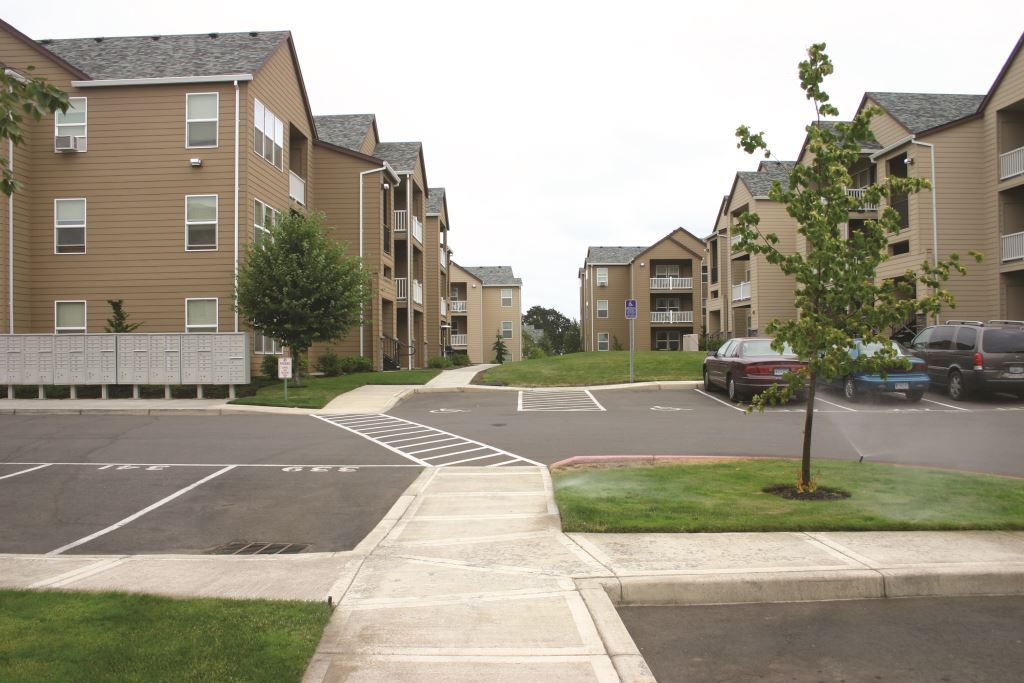 Attractive pedestrian paths in Eola Heights, Salem, OR. Photo courtesy Nico Larco, Kristin Kelsey, and Amanda West.
New residential construction data from the Census Bureau show once again that the housing recovery is being carried by multifamily housing. While single-family home stats have remained relatively flat, multifamily housing has been surging for the last five years. If this housing is anything like the bulk of multifamily housing that has been built in this country over the last five decades, we can assume the vast majority is in suburban locations and part of large lot projects with anywhere from thirty to hundreds of units. One large question for this housing is its design—or more specifically, its site design. The vast majority of the more than nine million units of suburban multifamily housing in this country has site designs that are dominated by parking, limited or no sidewalks, and a complete lack of connectivity to the surrounding uses. While this housing is typically located within walking distance of stores (it is often used as a buffer between single family homes and the commercial strip) this lack of connection and walkability often forces residents into their cars, making short range trips, and clogging streets. Studies have shown that by just making simple, direct connections between multifamily housing developments and nearby stores, and by providing a basic sidewalk network, walking trips in these areas increases dramatically. These simple walking trips to the neighbor’s house or a nearby store are more sustainable, can help reduce traffic congestion, and increase residents’ livability. Especially for the young and the elderly, having walking be an option greatly increases their independence and quality of life. As my coauthors and I describe in Site Design for Multifamily Housing: Creating Livable, Connected Neighborhoods, these changes to multifamily site design are not complicated and do not need to be expensive. Adding sidewalks, making direct connections where possible, and designing parking so it is not the backbone of a development can happen with relative ease as long as it is considered early in the development process.
cities
housing
pedestrians
suburbs
urbanism

Nico Larco, AIA, is an Associate Professor in the Department of Architecture and is Affiliated Faculty in Planning, Public Policy, and Management at the University of Oregon. His book is Site Design for Multifamily Housing: Creating Livable, Connected Neighborhoods.