Anya Sastry can go on about politics forever; in fact, in addition to pursuing the path by applying to colleges and taking her ACT exams, she is the national state lead for the U.S. Youth Climate Strike. She’s only in her junior of high school and yet, she is one of many young people doing more out of school to promote social environmental change. But Sastry said she’s always been interested in politics.

Ever since Anya was a little girl, her parents exposed her to global issues and current events around the globe. They did not raise her in a little bubble, but rather made sure that she was aware of what was happening around her. For the past four years, Sastry has been a changemaker and advocate for social justice by becoming involved with grassroots organizing and activist efforts, from gun violence prevention, immigrant rights and recently climate activism.

Sastry was drawn to climate activism the moment she understood the gravity human-induced climate change had on the environment and future of generations, particularly when the UN came out with their report. At that point, the report signified an urgency with regards to the climate crises and that the only way to reverse such impending disasters had to be done within 12 years. The implications of not taking action within 12 years hit home with her; but after seeing the “This is Zero Hour Movement” and witnessing climate activist getting involved, she was inspired to join the fight.

“I reached out to some of the national leaders and I said, ‘Hey, how can I get involved?’ And they said, ‘Well, you can be a state lead for your state’,” said Sastry. “And so, I took on the position as Illinois state lead along with the other Illinois state lead, Isabella Johnson.”

The two did not know each other, having only met online. But after talking for a while, they took on the position and for the past two months, they worked on planning and organizing the strike with other local Chicago activists. Some of the challenging roles that went with the job was reaching out and networking with grassroots. In her activism, Sastry worked with the local organizers and members of the national board of the US Youth Strike, bringing awareness to others and setting up protests on a local, regional and national level. She contacted kids from all over Illinois, from the inner city school kids to kids in rural areas. They searched for people to speak at the rallies, which ranged from Chicago politicians to other student activists.

Social media played a major impact on the protest, helping with reaching out to people and getting in contact with them, that without it, Sastry said she wasn’t certain how far things would have gone.

When asked if she felt that young people were doing more than people in office, she said yes.

“When leaders start acting like children, children have to start acting like leaders,” Sastry said. “We shouldn’t have to do this, but I think our elected officials and people in power are not taking action on the issues that need to be solved...and I think that it’s so great that our generation is taking charge and really taking matters into our own hands.” 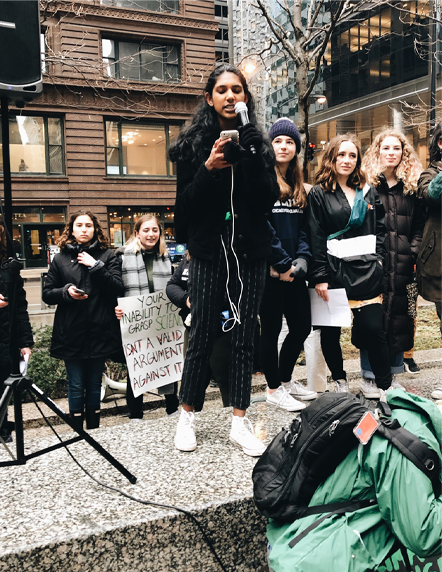 Despite news of pushback from students skipping school, Anya’s community was very supportive of what she was doing. Sastry said that she was lucky to have people, adults and her peers, in her life throughout her journey in activism. But she was also aware that not everyone could be so fortunate. In recent news of cases in which criticism of student walkouts and activism are happening in this country, it seems that some adults see little point in the youth protests, saying that they’re using the cause as an excuse to skip school or that they are too naive. But Sastry thinks differently.

“People often get a lot of pushback from climate change deniers or adults that say, ‘Oh, you’re too young to be doing this’,” said Sastry. “But I think that those people are ultimately trying to take away our power because they realize that we have so much power.”

One of the most recognized climate change deniers happens to be our president, to which Sastry said he doesn’t think he realizes how impactful his actions are; or the extent to which he takes his power and his position for granted.

She would try to appeal to him, believing that emotional appeal and pathos is some of the qualities that make everyone human and that despite everything, Trump may still have some in him. She said that if she were to ever face Trump, she would try to make him understand from her and several others perspectives how much the future is endangered if he doesn’t take proper action.

Proper action need not be on large scales, but can be done in small ways on an everyday basis by everyday people.

“People often don’t realize that what they do on that small scale can impact in the long run. And they’re like, ‘Me not recycling or eating meat is not going to do anything, not going to affect anything, not going to change anything”. But she insists that if you do meatless Mondays, if you recycle, or turn off the lights, or take shorter showers, then it will all work towards combating climate crises in even the smallest of ways. On a larger basis, our elected officials and people in positions of power should take legislative action; the result of not going toward 100% sustainable energy would lead to irreversible consequences.

But there is hope.

After the amazing turn around in the Youth Strike, she and the Illinois chapter are working on future projects, the most recent being the next youth strike planned for May 3rd across the U.S. and the world. As the national outreach director, she is doing more grassroots organizing and activism on a national level, working with people from all over the country and not just in her local area.

She beckons teens to get involved.

“If you don’t know where to start, there are organizations that would be so open to have you, but I think the first step that you can take is within your school,” Sastry said.

Start a club or organization within your school and that can be a great stepping stone into getting involved with other organizations. If you would like to get involved on a national level, take charge in your own community and environment. Educate your community members on crises. Become a part of the activist community online to find other people who share a similar opinion as you and who would also want to be changemakers.

“I mean, we have such a great activist community online and social media has helped so much with promoting that community,” said Sastry. “I think that besides starting your own club at school, becoming a part of that community is a good place to start.”

Chidinma is our web and social media intern.