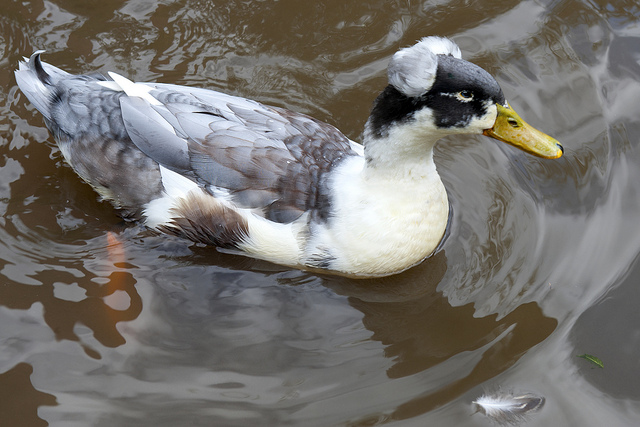 The crested duck is host to a mutation that can be lethal. Photo by RayMorris1, used under Creative Commons licensing.
Reposted with permission from the Chasing the Red Queen blog. It’s common knowledge that genetic mutations are bad. Most sci-fi and horror movies will attest to that, but we also understand that a great deal of human suffering occurs because of genetic mutations and abnormalities. The huge number of deleterious alleles in the human genome is the result of mutations and when two of them match up in an embryo, it almost always results in problems. So, genetic mutations are bad. The problem with pesticide resistance around the world is that insects and bacteria and all other nuisance species develop resistance as a direct result of mutations. When a toxin is first applied, the mortality rate in the target pest species is very close to 100%, but within a few years, sometimes less, the toxin eliminates a smaller and smaller percent of the pest population until eventually the person applying it is just wasting money (and likely polluting the environment for no good reason.) And it’s always because a mutation for resistance emerges and spreads through the population. Mutations thwart our efforts to control pest species. So, again, mutations are bad. If we think of life as a process of adapting to the stresses of the environment, and those stresses change both regularly and unpredictably, there is a very basic need for genetic variation in any population. Without genetic variation, every individual would be identical and equally susceptible to every new stress. All genetic variation in all species comes from mutations; ultimately, there is no other source of genetic variation. And survival in the face of stress requires genetic variation. But wait, doesn’t that imply that mutations are good? 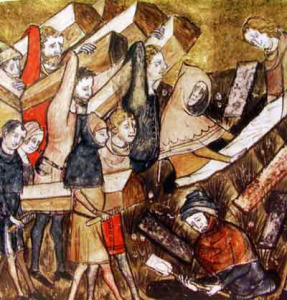 A fourteenth century miniature of the burial of plague victims in Tournai, Belgium. Photo via Wikimedia Commons.
Consider humans facing a new and lethal bacterial threat, such as Yersinia pestis, otherwise known as Bubonic Plague. In 1347-1351, the plague traveled from Mongolia, swept across the Mediterranean Basin, and then devastated Europe. At least 28 million people died, which was about 40% of the population. In large cities, the dead accumulated so rapidly the municipalities were incapable of handling the bodies and the dead were buried in mass graves. In rural areas, many small towns appeared afterward to be abandoned as everyone seemed to have died. That’s what the records tell us, but what they often fail to mention are underling reasons for the patterns of death. Yes, cities were hit first and the numbers of dead were staggering, and cities typically are where epidemics emerge. But the mortality rate in the cities was never 100%, as it may have been in many small towns. Almost certainly the reason for that was genetic diversity. Cities, especially ports, were and are melting pots where people from all over the region and perhaps the world mix. Diseases can be prevalent because of the high contact rates among so many people, but historical per capita death rates were lower due to the high genetic variation among all of those inhabitants. In contrast, small rural towns in medieval times were populated entirely by closely related families, clans, and groups who often maintained a high level of social isolation from other communities. Most had been born and raised in their town, they married and had children who followed suit. With the onset of a new and highly contagious epidemic, if one person was susceptible to it, then virtually every person was susceptible to it. The low genetic variation within the local populations meant the probability of resistance from a random mutation was very low. Every species is capable of adapting to the stresses of the environment and no living species has ever failed to adapt. The capacity to adapt is the result of mutations that provide variation in the ability to respond to those stresses. Without mutations, nothing can survive the repeated attacks from nature. Humans, like any other species, have survived those attacks and that legacy is written in our DNA. Quite literally, if it weren’t for mutations, we would not be here today. If survival is predicated on genetic variation, and genetic variation can only arise from mutations, then mutations are necessary for survival. And it should therefore come as no surprise that the insects we attack with pesticides answer the call to adapt so readily. And if mutations are that integral to survival, it is certainly possible that our attempts to eradicate our pests may favor future generations with even higher mutation rates. Modern agriculture is predicated on the attack. Every chemical pesticide is an attempt to eradicate a species that has a very long history withstanding attacks. We have never eradicated a pest and we never will. In fact, our untiring efforts have only made them stronger and more capable. This is the basic message of Chasing the Red Queen.
biodiversity
cities
diseases
ecology
evolution
genes
history
mutations
pathogens
science