Skip to main content
Home   /   Blog   /   Why Biking and Walking Advocates Love and Hate the Census
Reposted from the Alliance for Biking & Walking's blog with permission. The American Community Survey (ACS), which is performed every year on a small percentage of the U.S. population, has one question that makes it especially important to biking and walking advocates: 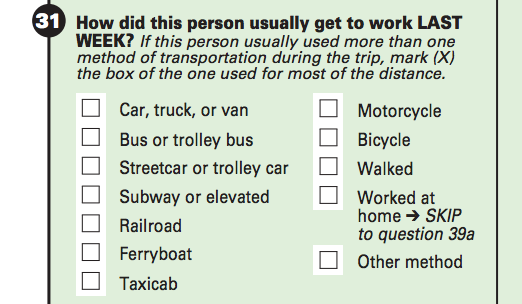 Source: US Census
The ACS asks how you usually got to work last week. Many options are presented, including "Car, truck, or van," "Bus or trolley bus," "Subway or elevated," "Bicycle," and "Walked." The question also asks that if you used more than one form of transportation last week, you choose the one that you used the most often. This question is both wonderful and heartbreaking for biking and walking advocates. It's wonderful because it gives advocates and government officials reliable estimates every single year about what proportion of people bike and walk to work in states and communities all across the United States. Thanks to ACS data, we're able to compile a veritable treasure trove of vital information about biking and walking. In the 2014 Benchmarking Report, we show which cities have the highest levels of biking and walking to work (Portlanders win for biking; Bostonians walk most); analyze how a city's fatality rate relates to its rate of biking and walking to work (there's a strong reverse correlation), and analyze how levels of biking and walking in the US are changing over time (it's gradually increasing). In short, the commute question from the annual American Community Survey is currently one of the most reliable sources of data on biking and walking. But the question also breaks advocates' hearts, because it significantly undercounts bicycling and walking. The first and most obvious reason is that the ACS only asks about trips to work. Anyone who doesn't travel to work on a daily basis—little kids, seniors, telecommuters—is automatically excluded. And because work commutes only represent a small portion of all trips, the ACS tells us about a very small fraction of all of the transporting that Americans do. Another clear reason that the ACS underreports biking and walking is that the commute question asks respondents to choose only one mode of transportation. If a respondent walked to a bus stop in the last week, she'll be counted as a transit-taker but not a walker. If she bicycled on two days and drove on the other three days, she'll be counted as a driver but not a biker. The single-mode requirement flattens the reality of our everyday transportation choices. We're multimodal beings, especially in a community where we're presented with a diversity of transportation choices. No one is just a driver or just a pedestrian or just a bicyclist—we all use some mix of modes get around, even if that only means being a pedestrian from your parking spot to the grocery store entrance. We have hard data to show that the ACS's commute question underreports biking and walking trips, thanks to another transportation survey, the National Household Travel Study (NHTS). Unlike the ACS, the NHTS asks respondents about all the trips they take—work trips, leisure trips, shopping trips, you name it. Read the rest of the post.
bikes
cities
transit
transportation
urbanism
walkability