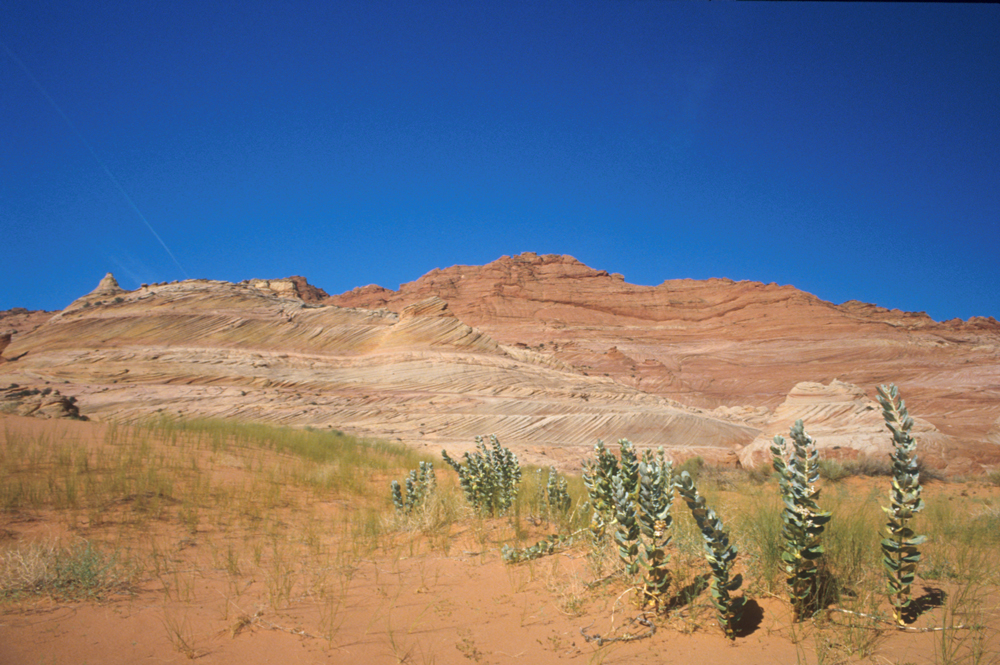 Asclepias welshii, a species of milkweed native to Arizona and Utah, in situ.

Editor's note: Tomorrow marks the fiftieth anniversary of the signing of the Wilderness Act. To commemorate the anniversary, we asked a small group of Island Press authors to reflect on the influence of this law to date and how its role may or should change as we move into an uncertain future. We are sharing the series through the end of this week. We celebrate the 50th anniversary of The Wilderness Act, which preserved areas where motorized transport and construction are minimal or absent and where some of nature’s rare jewels have been spared the blade of development. With climate change the very organisms these areas were designed to protect may not be able to survive within the boundaries of the wilderness area. Rare plants residing within wilderness areas and elsewhere have been the foci of our work, thus we’d like to address several concerns raised by Christopher Solomon in his article, “Rethinking the Wild.” 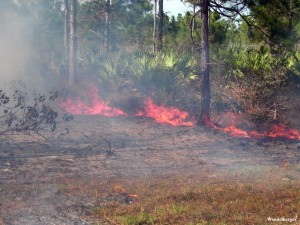 Prescribed fire can be an important process to support plants that rely on fire.

We agree that “hands off stewardship” has led to several dire conditions affecting rare plants and their communities. We see invasive plants muscling in, usurping space normally occupied by natives. We see the impacts of fire suppression that threaten water supply, understory diversity, and forest health, while creating dangerous conditions for hot, uncontrollable wildfires and insect outbreaks. We agree that one serious consequence of climate change may be that plants find themselves in spaces that no longer can sustain them due to shorter growing seasons or less available water. If their existing space becomes inhabitable, plants have three options: to adapt, to move or to die. Studies by Loarie et al. (2009) project that from 2000 to 2100 the average global velocity of temperature change will be 420 m/year. Compare this to 5.9 m/ year recorded during the last glacial maximum. Quite a change! For the rose growing in the wilderness without supplemental water and T.L.C., this could spell disaster.  Adaptation is unlikely to occur that rapidly. Natural dispersal is unlikely to reach that far and that fast.  And death would be certain. 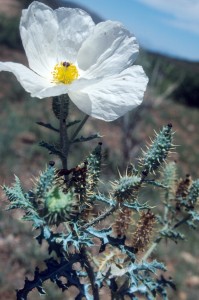 Argemone pleiacantha, also known as the southwestern prickly poppy, is native to Arizona, New Mexico, and parts of Mexico.

Dedicated plant conservationists insist that doing nothing to protect rare plant species facing threats of changing climate is unethical and untenable. Recently reviewed options include ex situ conservation, inter-situ conservation, increasing the resilience of the existing population through population augmentation or improving the habitat conditions (like removing invasive species and decreasing canopy cover in fire suppressed forests), building new populations or reintroducing within historic range or moving the species outside of its historic range. All of these options have pros and cons.  See Plant Reintroduction in a Changing Climate for in-depth discussion. The most controversial option, assisted migration, can be ameliorated through a careful scientific approach and careful evaluation before actually moving any species. An important new tool, the Southwest Experimental Garden Array (SEGA) is now available for this purpose. SEGA is a National Science Foundation-funded instrument designed to separate environmental effects from genetic-based effects using a common garden research approach. In using SEGA, scientists will be able test the abilities of species to move in a controlled setting and be able to determine appropriate plant genotypes for use in restoration projects; plants that will be better adapted for a changing climate. Wilderness areas will undergo change. Although their inhabitants may require human assisted migration, the wilderness areas themselves cannot move. We will simply have to enjoy them in their transformed state.

Joyce Maschinski is the conservation ecologist leading the South Florida conservation program at Fairchild Tropical Botanic Garden. With Kristin E. Haskins, she is co-editor of Plant Reintroduction in a Changing Climate: Promises and Perils.

Kristin E. Haskins is the research scientist at The Arboretum at Flagstaff and a research assistant professor at Northern Arizona University in Flagstaff, Arizona. She is the co-editor of Plant Reintroduction in a Changing Climate.