Skip to main content
Home   /   Blog   /   The Wilderness Act at 50: Better With Age
Editor’s note: Today marks the fiftieth anniversary of the signing of the Wilderness Act. To commemorate the anniversary, we asked a small group of Island Press authors to reflect on the influence of this law to date and how its role may or should change as we move into an uncertain future. This is the last piece in the series. It is reprinted from 50 Years of American Wilderness with permission. 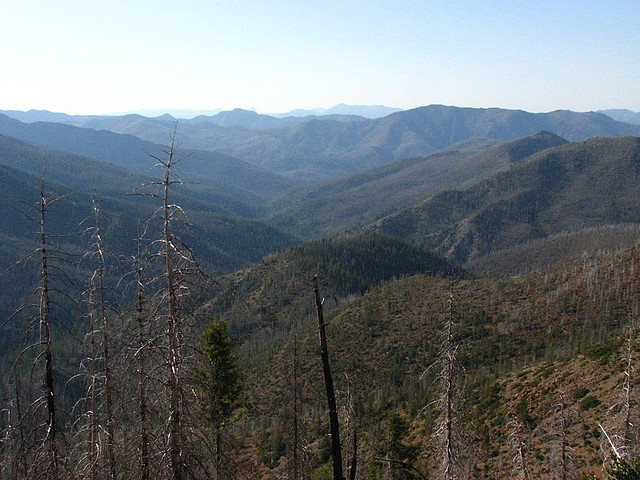 Kalmiopsis Wilderness in Oregon, where fires are a key ecosystem feature. Photo by Justin Rohde, used under Creative Commons licensing.
I was only 8 years old when President Lyndon B. Johnson signed into law the Wilderness Act of 1964, designating the nation’s first 9 million acres of the wilderness preservation system. As an inner-city kid, wilderness for me was a vacant lot where we played stick ball games and launched bottle rockets on the 4th of July. Fifty years later, I am celebrating the more than tenfold increase in the wilderness preservation system that has now spanned my lifetime. My career as a conservation scientist has allowed me to focus on the importance of lands with wilderness character as I have been making the case for why we need even more of them protected now than when I was a child. In its infinite wisdom back then, Congress defined wilderness as an area that “(1) generally appears to have been affected primarily by the forces of nature, with the imprint of man’s work substantially unnoticeable; (2) has outstanding opportunities for solitude or a primitive and unconfined type of recreation; (3) has at least five thousand acres of land or is of sufficient size as to make practicable its preservation and use in an unimpaired condition; and (4) may also contain ecological, geological, or other features of scientific, educational, scenic, or historical value.” The Wilderness Act preserved a slice of our natural history, and, in doing so, connected us to the powerful forces of nature that shape life on this planet. We need these areas because very few places outside them are large enough or remote enough to support fully functional natural processes–also known as ecosystem processes. Nature’s processes include predators in pursuit of prey, tiny organisms recycling soil nutrients, pollination by birds and bats, mass wildlife migrations, large natural disturbances such as fires and floods, and unimpeded stream flow. In short, this is what puts the wild in wilderness. Apex carnivores like wolves, bears, and wolverines find sanctuary in large wilderness areas, free to roam about without poaching, off-road vehicle intrusions, chainsaws, and cities in the way. Large wild areas also act as “strongholds” for aquatic species, especially trout and salmon, that find refuge in them. Rivers running through wild areas, if they are large enough to encompass entire watersheds, like many in Alaska, allow fish to migrate from ocean to spawning grounds and back again without bumping into dams, cow-damaged stream banks, polluted waterways, and clearcut hillsides. And large wild areas buffer native plants from invading weeds that otherwise disperse along roads and out-compete the natives. This year, we celebrate some of the most spectacular wilderness areas in the world. The crowning jewels of our nation’s public lands represent less than 2 percent (more than 109 million acres) of the total land base, but are some of the most important areas we have left. Wilderness is concentrated in the Pacific Northwest, Alaska, the Rockies, and portions of the Southwest where large areas (at a landscape scale) support natural disturbances uninterrupted by humanity. It is in these areas that we best observe natural processes at work, wildlife and wildlands in a natural state, as they have existed for millennia. Smaller wilderness areas in the eastern and central United States are also important as building blocks for re-wilding landscapes. Read the rest of the article in 50 Years of American Wilderness beginning on page 16.
biodiversity
conservation
ecology
environment
fires
Wilderness Act
wildlife