Skip to main content
Home   /   Blog   /   Win-Win for Wind Energy and Wildlife Conservation
Wind energy offers the potential to reduce carbon emissions while increasing energy independence and bolstering economic development. I am a huge proponent of harnessing wind to power our lives but this form of energy development has a larger land footprint per Gigawatt (GW) than most other forms of energy production, making appropriate siting and mitigation particularly important (Figure 1).

Wildlife species requiring large and intact habitats and those that avoid tall structures are particularly at risk from wind development. Developing energy on disturbed lands rather than placing new developments within large and intact habitats would reduce cumulative impacts to wildlife, a major tenet of our new book Energy Development and Wildlife Conservation in Western North America. As outlined by the Administration’s report ‘20% Wind Energy by 2030’, the Department of Energy (DoE) estimates it will take 241 GW of terrestrial based wind development on approximately 5 million hectares (12.3 million acres) to reach 20% electricity production by 2030. In a paper published this week in the scientific journal PLoS One The Nature Conservancy and I (and 5 others) estimate there are ~7,700 GW of potential wind energy available across the U.S., with ~3,500 GW on disturbed lands; plenty of wind potential within disturbed lands to meet our national goal. Implementing a disturbance-focused development strategy would avert development of ~2.3 million hectares (5.7 million acres) of undisturbed lands while generating the same amount of energy as development based solely on maximizing wind potential. New wind development has comparatively low wildlife impacts if sited in disturbed areas, and a disturbance-based development strategy is largely compatible with current land uses. Given turbine spacing needs, wind farms typically use only 2-4% of an area, making it compatible with agricultural production on tilled lands where few wildlife values remain. Moreover, compensation for development increases profitability of disturbed lands that balance agricultural and oil and gas fields with wind development. For example, farmers receive $4-6K per turbine per year on land in corn production that yields an annual profit of <$1K per hectare. Given the nationwide surplus in wind energy, it is conceivable that states unable to meet goals on disturbed lands could import electricity from states where there is a surplus of disturbance based wind energy (Figure 2). 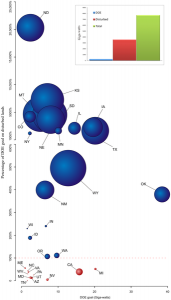 Figure 2. Available wind-generated Gigawatts (GW) in each state as a percentage of the DoE goal that can be met on disturbed land. Bubbles indicate where goals can (blue) and cannot (red) be met on disturbed lands. Bubble area indicates total GW of wind potential available in the state (Range 0.37 GW in TN to 902 GW in MT). Inset shows potential GW wind production for the entire U.S. and potential on disturbed lands relative to the DoE 20% projection (modified from Kiesecker et al. 2011 PLoS One paper). A number of states have a significant surplus of wind potential on disturbed lands where additional development would not likely cause significant wildlife losses. Joe Kiesecker, the primary author on the PLoS One paper and Lead Scientist for The Nature Conservancy notes the importance of mitigating for climate change. “As a climate change mitigation strategy we need to ensure that renewable energies do not result in habitat loss similar to the effects that climate change will likely have. By prioritizing development on disturbed lands we can ensure that we get the benefits of renewable energy while maintaining biodiversity that is critical to human well being”. Using science to help site wind developments presents a win-win solution for securing our Nation’s energy independence while safeguarding its wildlife heritage. Readers can learn more about how proper wind siting can conserve wildlife in their state by visiting The Nature Conservancy’s Development by Design website. David Naugle is a professor in the Wildlife Biology Program at the University of Montana and a leader in wildlife conservation in the West.  He is author of Energy Development and Wildlife Conservation in Western North America. Follow Dave's new book and related work on Facebook.
climate change
conservation
economy
energy
wildlife

David Naugle is Associate Professor and Applied Landscape Ecologist in the Wildlife Biology Program, University of Montana, Missoula, where he teaches courses in landscape ecology and wildlife habitat management. He is the editor of Energy Development and Wildlife Conservation in Western North America.