Skip to main content
Home   /   Blog   /   Wolves and the Ecology of Fear in Action
Recently, I spent time with a friend in a northern part of the Rockies with thriving wolf population. My friend was skeptical about how wolves affect ecosystems—was—because an event that morning rapidly changed his mind. 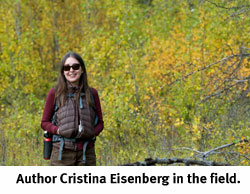 We visited a large meadow ringed with aspens, which were in peak of their turning. A bull elk’s ragged bugle cut through the morning stillness. This particular aspen stand had burned in a 2003 wildfire. The blackened bones of downed trees littered the stand, providing blatant evidence of the fire’s severity. Among the dead trees stood the hundreds of straight-trunked aspen that came up since the fire and nearly grown beyond the sapling stage into slender young trees. Aspens respond favorably to fire—indeed some ecologists think that this species requires fire to persist and thrive. Fire creates a powerful nutrient surge that sends aspen sprouts shooting up, stimulating a vibrant flush of growth— like the bright thicket surrounding the meadow. Aspens provide essential nutrients for deer and elk, but this relationship can go awry when wolves are absent. Scientific studies conducted in wolfless areas with high elk populations show that burned aspens rarely make it above knee-height, because hungry elk mow them down. Indeed, death from being eaten is a key factor in aspen decline. However, here in the northern Rockies, where wolves abound, the aspens grow thick and lush. Many of the aspens in the meadow now reached above seven feet—the height an elk can reach. We walked across the meadow for a closer look at the trees. Along the way, I parted the tawny grass. Deer and elk pellets thickly carpeted the ground, but as we entered the aspen stand, the pellet density dropped sharply. We threaded our way through the aspens with difficulty because the ground was so liberally covered with deadfall and fire debris. The saplings had only been lightly nibbled. “The debris makes it difficult for deer and elk to see predators—and escape them,” I explained. “Wolves are much more agile in deadfall than their prey. All it takes is one stumble or even one second of hesitation by a pursued deer or elk to give a wolf a lethal advantage. Because of this, hoofed animals are using the aspen but spending most of their time in the open, where they are safer.” 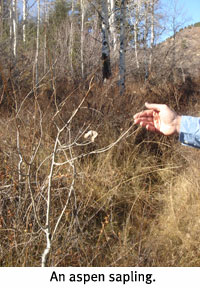 “What about all the rain we’ve had this year?” countered my friend. “Couldn’t that be what’s causing all this growth?” We looked around, seeing the pattern of light browsing repeated throughout the stand. Yet my friend remained skeptical about the fact that this could be a trophic cascade—a wolf effect. Trophic cascades work like this: an apex predator, such as a wolf, influences its primary prey, such as an elk or a deer, by killing or scaring it and making it more wary. Termed “the ecology of fear,” top-down dynamics originating from an apex predator can cause profound effects in elk or deer behavior, forcing them to nibble plants warily and look up frequently, rather than standing around complacently browsing aspens and shrubs to death. This dynamic frees saplings and shrubs from browsing, improves habitat for other species, such as songbirds, and increases biodiversity. Bottom-up (nutrient-related) effects, such as the nutrient surge after the fire or the three relatively wet years also contribute to aspen growth. I suggested that it was never bottom-up or top-down (wolves), because ecosystems are complex. What we were seeing in this meadow was a combination of both of these effects. While we stood among the aspens considering the finer points of this debate, there was an explosion of sound. We turned and saw a white-tailed deer running for its life, legs fully extended like those of a racehorse, tearing downslope about 50 yards behind us—five yards behind it coursed a lone wolf, closing in fast. The deer hit the aspen and stumbled. We heard a welter of crashing sounds and then abrupt silence. The wolf had taken down the deer, hidden from our sight by the dense thicket of young aspens. For some long moments we stood motionless, at a loss for words because of how unprecedented it was to be vouchsafed a glimpse of a trophic cascade in action. My friend wanted to check out the carcass, but I told him no, that in doing so we could disturb the wolf and cause it to abandon its meal. Soon ravens would be arrowing toward the kill. Grizzly bears and cougars would arrive soon after, drawn by raven calls and by the coppery scent of fresh blood. So we left on that fine autumn morning, talking spiritedly about the eloquent demonstration of the ecology of fear the wolves had provided.
biodiversity
trophic cascades
wolves