Skip to main content
Home   /   Blog   /   Wolves in the Pacific Northwest: Ecology’s Tangled Web
Washington State’s old-growth rainforests are among the richest communities on earth. These ancient forests support astonishing biodiversity due to their high moisture, nutritious soil, and architecture. The Douglas-fir, a formidable tree giant that can live over 1,000 years, embodies these forests’ physical characteristics. Its 500-foot-tall, multilayered canopy, thick trunk, and enormous volume (called “biomass”), whether living or dead, provides home for many species. Life and death merge seamlessly on the spongy ground, with dead fall acting as nurse-logs to tender saplings—all part of the same continuum. Yet for the past eighty years, these wet, verdant forests have lacked a vital species. By the 1930s humans removed wolves from the Pacific Northwest. Without the presence of a strong predator, elk exploded in number. Hungry animals rapidly browsed highly edible hemlock and cedar saplings, preventing them from growing into adult trees. Without young trees—the habitat, in turn—diminished in quality. Now many people believe that the wolf’s return promises to create big changes. Or will it? 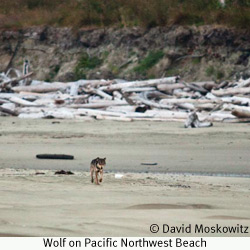 Since 2007, wolf recovery in Washington is advancing naturally, as the animals travel here from Canadian and U.S. populations. There are now several documented wolf packs and dozens of reliable wolf sightings. Washington State’s progressive wolf management plan acknowledges this species’ powerful ecosystem-regulating role through trophic cascades. Trophic cascades are the direct and indirect food web effects of apex predators, such as wolves. Directly affecting their primary prey, elk, by killing them, wolves also indirectly affect them through fear. This powerful relationship causes energy to cascade through the food web from the “top-down,” like a waterfall. Wolves profoundly affect elk behavior, forcing them to nibble plants warily and look up frequently, rather than complacently browsing plants to death. This means that saplings and shrubs are not over-browsed and therefore many grow into trees, thereby improving habitat for a wealth of other species increasing biodiversity. Healthy saplings and shrubs provide more food for other species besides elk. Thus wolves touch everything in a forest, sending energy rippling through the food web from the top-down. However, energy surges caused by fire or timber harvest, which open a forest’s canopy, allowing sunlight to stream in, also contribute to plant growth. Because this involves nutrients stored in the soil, it is often referred to as a “bottom-up” effect. According to conservation biologist Michael Soulé, in any landscape it is never bottom-up (resources) or top-down (wolves), but rather an intricate weave of both effects. Scientists found strong wolf-driven cascades in places such as Isle Royale and Yellowstone National Parks. With wolves undeniably here to stay in Washington, what trophic cascades might we see? In Yellowstone, before the wolf’s return, elk had been hedging these plants down to ankle-height. People have noticed dramatic changes in the decade since wolf recovery, such as the tall tangle of flourishing willows and aspens along formerly barren stream banks. While in Seattle recently to read from my book, The Wolf’s Tooth, I discussed wolf ecology with local authors and wolf conservationists. My writer friends wanted to know whether we would witness similar changes in Washington now that wolves are back. University of Washington professor Jerry Franklin, often called the “guru” of old growth, suggests that trophic cascades in the northwest may differ from those in simpler systems. Things may not be so simple in Washington’s lush, wet forests as in Yellowstone’s comparatively arid forests, where wolf effects are well-documented. In rainforests, as elsewhere, top-down energy combines with bottom-up effects, which include nutrients from moisture and disturbance (fire, timber harvest). And in these moisture-rich forests, bottom-up energy flow may be tremendous. Nevertheless, because of their role as ecosystem regulators, wolves are highly relevant to Pacific Northwest ecology and conservation. In the 1930s wildlife ecologist Aldo Leopold argued that wolfless forests in Germany and Yellowstone could be considered “empty” forests, because of their significantly altered and diminished food webs. In their recent research on Washington’s Olympic Peninsula, scientists Robert Beschta and William Ripple concluded that wolves wield similar effects here. Elk undoubtedly have had a strong impact on forest understory plants in Olympic National Park’s valley bottoms. Franklin and others have measured this in two “exclosures” 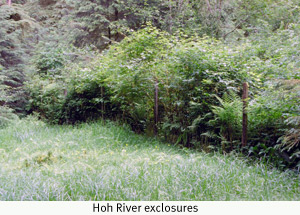 —large areas fenced to keep out elk—in place for several decades in the South Fork of the Hoh River. Elk have shaped tree communities here by feeding selectively on hemlock, cedar, Pacific yew, and huckleberries. I visited these exclosures with Franklin two summers ago, and he showed me the powerful impacts of unregulated elk. The exclosures’ sturdy 12-foot fences protected tall, profligate thickets of young trees and shrubs, as well as skunk cabbages (a tasty browse species) eight feet in diameter. Outside, where elk could freely munch trees and shrubs little grew besides grass. The wolf’s return to the Pacific Northwest will certainly reduce elk density and their effects on communities. Forests here may soon be changing boldly, as tender hemlocks, cedars, and other plants grow beyond the hungry mouths of elk. This could affect everything, down to the soil and the thousands of species it harbors. However, these top-down effects may be context-dependent: stronger in younger forests that have experienced timber harvest, fire, or volcanic eruption, whose resulting rapid growth of succulent saplings and shrubs attract more elk than ancient, closed-canopy forests. According to Franklin, while it’s quite likely that the wolf will create top-down effects in the Pacific Northwest, as elsewhere, the complexity of these interactions invites deeper inquiry.
biodiversity
trophic cascades
wolves