Skip to main content
Home   /   Blog   /   The Wonders and Surprises of the Unintentional
Stone Prairie Farm, the eighty acres of prairie, wetland, savanna and headwaters stream that we have restored serves as a snow fence. It captures snow and prevents drifting across neighboring county roads. The accumulating snow remains within the dense vegetation cover now growing on the restored undulating landscapes, including the high ridge tops and sloping expanses. Mill road abuts the farm for over half a mile in distance, along the eastern margin of Stone Prairie Farm. The past two storms have each covered the land with six inches or more snow. Because of our location in the former prairie ecosystem, open expansive landscapes still remain, but unlike our farm where we have replaced corn and soybean fields with restored native vegetation, most surrounding lands produce these crops during the growing season. During the winter, these fields are barren windswept landscapes often with no vegetation cover, not even crop stubble. The snow storms are typically driven by high winds from the north and west that pick up and blow drifting curtains of white, often creating white-outs. Once or twice a year we get snowed in. All roads except where Mill road buts our farm, become drifted over and we wait a day or more for the snow plow to push through drifts of ten feet or more that have covered sections of other roads. Where Mill road runs along the restored lands, occasional wisps of snow venture onto the pavement from the restored land hinting at the wishes of the inter-play between wind and snow. But the snow-holding ability of the restored prairie grassland, wetlands and savanna systems hangs onto the snow. The road pavement is typically cleared of snow by the same wind after it passes over and through the restored lands. The effects of this snow holding capacity of the restored lands is reflected in many ways. Traveling not more than ten feet or so beyond our property boundaries and drifting snow moves without impediment, crossing and covering the roadways. Drifting creates waves of drifted areas with deep snow, but most of the agricultural landscape retains a dusting and often exposed topsoil dries out and begin moving with the snow, discoloring the otherwise white drifts with black soil particles. A day or so of melting conditions, and the agricultural fields are bare, snowless; and erosion and flooding often accompanies the fast movement of the melted snow from such landscapes. 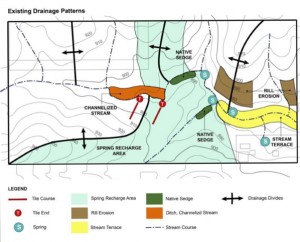 Stone Prairie Farm remains white and the snow deep and nearly uniform over the entire landscape. Some greater accumulations may occur in the lower areas on the property and slightly thinner caps of snow may be found on ridge tops. After a week or two of warm melting conditions, when black soils shows through on all surrounding farms, our restored land still retains snow. Perhaps this is because of the insulating effects of the native vegetation cover. Springs start running faster as the melting water recharges shallow (and perhaps deeper) ground water levels. The melting occurs slowly from the restored land and neither erosion nor flooding occurs. This discharging spring water supports rare darters, sticklebacks and other fish and increasingly rare aquatic insects found only in the cleanest streams, such as the restored headwater stream on our farm. When we started the restoration of Stone Prairie Farm in 1980, we had no understanding of the many insights and surprises we would learn. The snow-holding, “living snow fencing” function was one surprise. This snow-holding relationship with the restoration of ground water and springs is yet another insight. 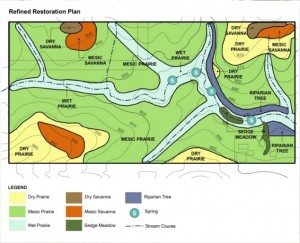 Now that rare fishes have come back, we have an inkling of even wider reaching relationships and insights. Every year since restoration began, our lives are given access to such interesting insights and understandings that will be fundamental to successfully bring life back to this and other industrial agricultural landscapes. Wouldn’t it be nice if the tens of millions of acres of crop fields in the USA also supported re-growing healthy water supplies, life and the stability in our streams and rivers, and to reduced downstream flooding. The living snow fence benefits these and other outcomes.
restoration

Steven I. Apfelbaum is Chairman of Applied Ecological Services Inc., a company he founded in 1975. He has worked on design, construction, management, monitoring, and research of ecosystems and has taught ecosystem restoration to land trusts, conservation organizations, and families interested in restoring their property.