Skip to main content
Home   /   Blog   /   Wood Ducks on a Wild River
Originally published by Village News, a publication of the community of Cabin John, MD. Wild, undammed rivers make dangerous neighbors. A signboard near the riverbank at one of the National Park entrances offers direct evidence of the Potomac's perils—57 drownings in ten years between Great Falls and Little Falls—about an 11-mile stretch. 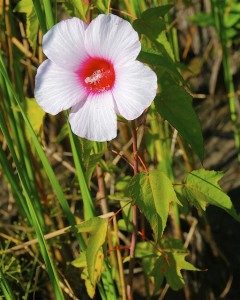 A Halberd-leaved mallow. Photo by Dan Mullen on Flickr via Creative Commons.
The Potomac seems most fearsome during one or another of the several floods that occur each year and sweep away whatever is not firmly rooted. Mid-March is often a time of high water, and curious strollers can sometimes watch giant trees be washed down the bank and carried off like pieces of kindling in the surging waters. Just as the floods overwhelm the forest along the flood plain they also renew it, burying seeds and silt in eddies along the banks. Some of the rarest plant communities in the East, called scour communities, depend upon the Potomac floods to rough out the riverbank eddies and deposit silt for water-dispersed seeds to sprout. Plants like the Halberd-leaved mallow spring up where the churning waters have created a new beachhead. A few years later this haphazard garden will be gone, carried off by the next big flood. Our regional forests are rich in tree species, but only a few are adapted to the selection event that is the annual or twice-annual flood in which root systems are inundated for weeks on end. The survivors that grow to reach the canopy are sycamores, silver maple, box elder, and river birch with pawpaw and spicebush clustered below. 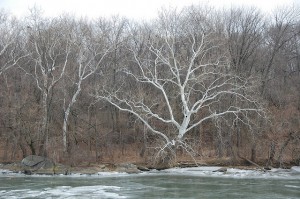 Sycamore along the banks of the Potomac. Photo by Joe Calhoun on Flickr via Creative Commons.
If there is a symbol of adaptation to flooding or defiance of high water, it is the stately sycamore, the most dominant tree in size and crown cover along the flood plain. This riverbank giant can grow to be 100 feet high and ten feet in diameter and live for 500 years. In winter, the leafless sycamore with its bright white bark—often covered with peeling jigsaw pieces of tan, white, and olive—stands out in stark beauty. When pilots take the flight path along the Potomac in winter to land at National Airport, a passenger might see from the window the forest along the river as a long narrow graveyard of bleached-white sycamores, like towering skeletons rising out of a once living forest. But the Potomac's banks are hardly nature's graveyard. For many residents of our Potomac region, sycamores, which are the last tree species to leaf out in the spring, provide vital habitat. The most massive and oldest trees develop cavities at ground level occupied variously by raccoons and other denning creatures. In earlier days, they were probably home even to black bears; now vacant ones make great places for children playing hide and seek. The most spectacular wild occupant, though, is the wood duck, which lives higher up the trunk, and is one of the few waterfowl in the world to nest in tree cavities. Their hole nests are courtesy of pileated woodpeckers, who excavate them and later abandon the nest holes that others claim for their own. 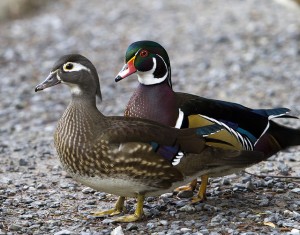 A pair of wood ducks (Aix Sponsa). Photo by Rick Leche on Flickr via Creative Commons.
The wood duck male is the most colorful of American waterfowl. Its Latin name (Aix sponsa) means "waterbird in bridal dress," though  the male's wedding tuxedo is a bit on the campy side with an iridescent emerald green headpiece and a coat trimmed in chestnut, yellow, white, and red. Wood ducks have developed a remarkable evolutionary adaptation, too: claws on the end of their toes, the better to grip tree branches and land on limbs. Wood ducks were once in steep decline in the U.S. but have made a major comeback since their low point in the 1930s. Part of the revival was spurred by the placement of nest boxes in their preferred breeding habitat—quiet ponds surrounded by their favorite food items like oak acorns and buttonbush seeds. Wood ducks are relatively easy to see from below Poolesville, MD, right up to the edge of Washington, D.C. So it was no surprise to spot three pairs of wood ducks on the Potomac at the tip of Plummers Island as I did on March 15th, during a day of high water on the river. But my shock came a few minutes later when on a pond deep in the forest near Lock 13, I surprised a bachelor party of 15 wood duck drakes. We so often think of large metropolitan areas as absent the wildest species with no chance to glimpse treasures like wood ducks at all, much less in such numbers. For nesting wood duck pairs, the wild riverbank is a place for giving birth to a new generation if they can find a perfect cavity high in the trees. If too accessible, prowling raccoons or climbing black rat snakes raid their nests. To the unwary parents of young ducklings, there is more danger lurking below their nest than in the strong currents of the river. In the early spring when the river is flooding, the wood duck clings to the sycamore with its unusual claws and the tree holds to the soil with its sprawl of surface roots. High up in the branches the handsome drake looks out for nest predators as the big river rolls by Cabin John, forming a meandering  ribbon  of wild habitat, a Potomac wilderness.
biodiversity
birds
ecology
environment
forests
rivers
trees
wildlife