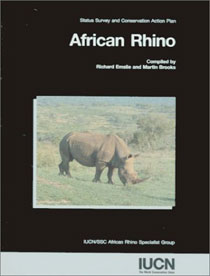 The black and the white rhinoceros have become flagship species for international conservation. They are significant not only for the continuation of a major evolutionary heritage, but also as symbols for the protection of African savannahs. The battle for the survival of these species has been marked by some notable successes and sadly, many failures, and the situation is still critical. The international horn trade ban and the domestic bans imposed in most traditional user states have driven the trade further underground, in some cases inflating prices and making illegal dealing even more lucrative.This Plan is aimed at donors, government and non-government organizations, and all those involved in rhino conservation. It outlines the actions and strategies needed to catalyse support for these majestic animals, and help secure their future in sub-Saharan Africa. The overall conclusion is that, given the political will, stability and adequate field expenditure, rhinos can be conserved in the wild.