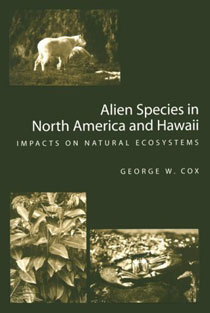 The world is in the midst of an ecological explosion with devastating implications. Thousands of species of microbes, plants, and animals are being introduced, both deliberately and inadvertently, to new land areas, seas, and freshwaters. In many regions, these new colonists are running wild, disrupting the dynamics of ecosystems, pushing native species toward extinction, and causing billions of dollars in direct economic damages.

Alien Species in North America and Hawaii provides a comprehensive overview of the invasive species phenomenon, examining the threats posed and the damage that has already been done to ecosystems across North America and Hawaii. George W. Cox considers both the biological theory underlying invasions and the potential and actual effects on ecosystems and human activities. His book offers a framework for understanding the problem and provides a detailed examination of species and regions. Specific chapters examine:

Alien Species in North America and Hawaii offers for the first time an assessment and synthesis of the problem of invasive species in North American and Hawaiian ecosystems. Scientists, conservation professionals, policymakers, and anyone involved with the study and control of invasive species will find the book an essential guide and reference to one of the most serious and widespread threats to global biodiversity.

"George Cox admonishes the reader and the governments of the world to do more to stop the spread of exotics...his book, in the right hands, will set that importatnt process in the right direction."
Ecological Restoration