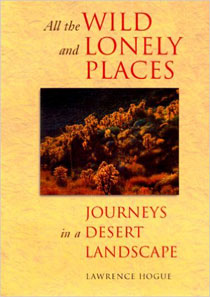 All the Wild and Lonely Places

Journeys In A Desert Landscape

"All the wild and lonely places, the mountain springs are called now. They were not lonely or wild places in the past days. They were the homes of my people." --Chief Francisco Patencio, the Cahuilla of Palm Springs

The Anza-Borrego Desert on California's southern border is a remote and harsh landscape, what author Lawrence Hogue calls "a land of dreams and nightmares, where the waking world meets the fantastic shapes and bent forms of imagination." In a country so sere and rugged, it's easy to imagine that no one has ever set foot there -- a wilderness waiting to be explored. Yet for thousands of years, the land was home to the Cahuilla and Kumeyaay Indians, who, far from being the "noble savages" of European imagination, served as active caretakers of the land that sustained them, changing it in countless ways and adapting it to their own needs as they adapted to it.

In All the Wild and Lonely Places, Lawrence Hogue offers a thoughtful and evocative portrait of Anza-Borrego and of the people who have lived there, both original inhabitants and Spanish and American newcomers -- soldiers, Forty-Niners, cowboys, canal-builders, naturalists, recreationists, and restorationists. We follow along with the author on a series of excursions into the desert, each time learning more about the region's history and why it calls into question deeply held beliefs about "untouched" nature. And we join him in considering the implications of those revelations for how we think about the land that surrounds us, and how we use and care for that land.

"We could persist in seeing the desert as an emptiness, a place hostile to humans, a pristine wilderness," Hogue writes. "But it's better to see this as a place where ancient peoples tried to make their homes, and succeeded. We can learn from what they did here, and use that knowledge to reinvigorate our concept of wildness. Humans are part of nature; it's still nature, even when we change it."