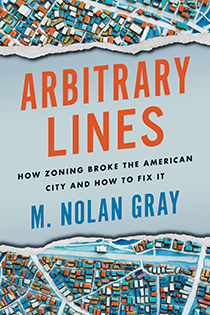 How Zoning Broke the American City and How to Fix It

What if scrapping one flawed policy could bring US cities closer to addressing debilitating housing shortages, stunted growth and innovation, persistent racial and economic segregation, and car-dependent development?

It’s time for America to move beyond zoning, argues city planner M. Nolan Gray in Arbitrary Lines: How Zoning Broke the American City and How to Fix It. With lively explanations and stories, Gray shows why zoning abolition is a necessary—if not sufficient—condition for building more affordable, vibrant, equitable, and sustainable cities.

The arbitrary lines of zoning maps across the country have come to dictate where Americans may live and work, forcing cities into a pattern of growth that is segregated and sprawling.

The good news is that it doesn’t have to be this way. Reform is in the air, with cities and states across the country critically reevaluating zoning. In cities as diverse as Minneapolis, Durham, and Hartford, the key pillars of zoning are under fire, with apartment bans being scrapped, minimum lot sizes dropping, and off-street parking requirements disappearing altogether. Some American cities—including Houston, America’s fourth-largest city—already make land-use planning work without zoning.

In Arbitrary Lines, Gray lays the groundwork for this ambitious cause by clearing up common confusions and myths about how American cities regulate growth and examining the major contemporary critiques of zoning. Gray sets out some of the efforts currently underway to reform zoning and charts how land-use regulation might work in the post-zoning American city.

Despite mounting interest, no single book has pulled these threads together for a popular audience. In Arbitrary Lines, Gray fills this gap by showing how zoning has failed to address even our most basic concerns about urban growth over the past century, and how we can think about a new way of planning a more affordable, prosperous, equitable, and sustainable American city.

Chapter 1. Where Zoning Comes From

Land Use Before Zoning
What Changed?
1916
The Federal Push

How Zoning Is Born
Decoding the City
Everything in Its Right Place
Don’t Be Dense
How Zoning Changes
Patching Up Zoning?

Zoned Out
Mandating Mansions
Housing Delayed is Housing Denied
Why Did This Happen?

Chapter 4. The Wealth We Lost

How Cities Make Us Rich
Zoning for Stagnation
How Much Poorer Are We?

Chapter 5. Apartheid by Another Name

Zoning for Segregation
All Are Welcome, If You Can Afford It
The Bitter Fruits of Segregation

Chapter 7. Toward a Less Bad Zoning

The Low-Hanging Fruit of Local Reform
Taming Local Control
Is There a Role for the Federal Government?
Turning Japanese

Chapter 8. The Case for Abolishing Zoning

Why Reform Isn’t Enough
Steelmanning Zoning
Meanwhile, Back in the Real World