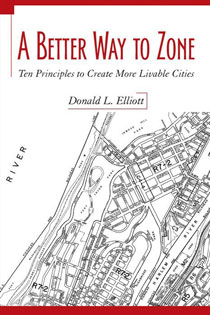 A Better Way to Zone

Nearly all large American cities rely on zoning to regulate land use. According to Donald L. Elliott, however, zoning often discourages the very development that bigger cities need and want. In fact, Elliott thinks that zoning has become so complex that it is often dysfunctional and in desperate need of an overhaul. A Better Way to Zone explains precisely what has gone wrong and how it can be fixed.

A Better Way to Zone explores the constitutional and legal framework of zoning, its evolution over the course of the twentieth century, the reasons behind major reform efforts of the past, and the adverse impacts of most current city zoning systems. To unravel what has gone wrong, Elliott identifies several assumptions behind early zoning that no longer hold true, four new land use drivers that have emerged since zoning began, and basic elements of good urban governance that are violated by prevailing forms of zoning. With insight and clarity, Elliott then identifies ten sound principles for change that would avoid these mistakes, produce more livable cities, and make zoning simpler to understand and use. He also proposes five practical steps to get started on the road to zoning reform.

While recent discussion of zoning has focused on how cities should look, A Better Way to Zone does not follow that trend. Although New Urbanist tools, form-based zoning, and the SmartCode are making headlines both within and outside the planning profession, Elliott believes that each has limitations as a general approach to big city zoning. While all three trends include innovations that the profession badly needs, they are sometimes misapplied to situations where they do not work well. In contrast, A Better Way to Zone provides a vision of the future of zoning that is not tied to a particular picture of how cities should look, but is instead based on how cities should operate.

"A Better Way to Zone just may be the best book on planning and zoning since The Zoning Game was published in 1966. Elliott's analysis of the politics, economics, law, techniques, and process of land development and zoning in America today is informed by his nationally distinguished career as a planner and attorney in the trenches of modern zoning. The book's final chapters should be required reading for anyone who believes that zoning should actually be about the 'general welfare.' A highly readable, informative, and insightful book—it is a remarkable contribution to this field."
Edward H. Ziegler, Professor of law, University of Denver

"Sometimes you find a book that you wish you could give to everyone you work with. A Better Way to Zone is such a book. It is a must-read for every professional planner, planning student, planning commissioner and city councilperson. This book clearly explains how we got to where we are today and provides a roadmap to the future of land use regulation. Mr. Elliot brings together his broad knowledge of planning law and an international perspective to provide us with a unique insight to our future."
Frank Gray, Frank Gray, Planning Director, City of Scottsdale

"Author Don Elliott was very involved in the planning of the Gateway project in Denver. He used this experience to formulate a plan for reforming the American zoning system to make it more responsive to the needs of citizens, and to build more sustainable cities. Throughout the book, he retraces the history, legal context, and development of our current Euclidean zoning system. Zoning is clearly explained in very readable language and exposed for its misconceptions, and Elliott makes a clear case for an overhaul of our zoning laws. He lays out a five-step plan based on ten principles of reform that will transform the way towns and neighborhoods are developed throughout the country."
City Matters Bulletin

"Urban zoning has become too strict with too many rules—and something has got to change, according to Donald Elliott. He's been a zoning and land-use consultant for 24 years, and works for Clarion Associates in Denver as an attorney and consultant.In Elliott's recently published book, A Better Way to Zone: Ten Principles to Create More Livable Cities he outlines how he thinks the rules should change."
Denver Business Journal

"Elliott's concise accounts of the origins and logic of most cities' 'Euclidean Hybrid Zoning' would serve as a good primer on the subject for students or citizens new to the field...I think the mantra about simplicity is the most important part of the book, and completely agree with Elliott that 'the more the public knows, the better they can participate at the policy- and rule-making level.' Let's hope his call for simplicity and transparency is heeded."
Rob Goodspeed, Goodspeed Update