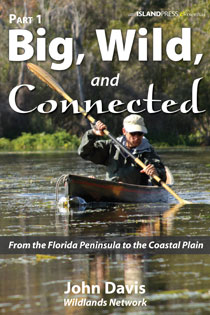 Part 1: From the Florida Peninsula to the Coastal Plain

This E-ssential is a three-part series that covers John Davis's epic journey from Florida to Maine. In 2011, with support from the Wildlands Network, Davis traveled 7,600 miles in 10 months from Florida to Maine by foot, bicycle, skis, and canoe/kayak. His extensive travels were motivated by wanting to answer the question “Is it possible in the twenty-first century to identify and protect a continental-long wildlife corridor that could help to protect eastern nature into the future?”

John paints a vivid picture of the physical challenges of the trek, such as climbing the highest point in South Carolina with a heavily loaded bike and trying to consume the 8,000 calories per day he needed to fuel himself for the journey. As readers adventure with Davis, they will also share his evolving understanding of what it would take to implement an Eastern Wildway.

Eastern wildlife, both seen and unseen, from Florida panthers to North Carolina’s red wolves to the ghosts of cougars farther north, are the real focus of this adventure as John explores how such wildness can coexist with human development in the most populated regions of the United States. The science and conservation of large-scale connectivity are brought to life by his travels—offering unique insights into the challenges and opportunities for creating an Eastern Wildway. This is a must-read for enthusiasts of hiking narratives, as well as professionals and students interested in issues related to large-scale connectivity. Compelling photographs and other graphics complement John’s fascinating story.

"Following in the footsteps of other conservationists such as J. Michael Fay and his legendary megatransect across the Congo Basin, John Davis brings to life the plight of large predators on the Eastern Seaboard, caught in an increasingly fragmented landscape. He proposes a visionary solution that offers new hope for wildlife and humans alike. Davis, like Fay, knows what he is talking about since he was right there."
Douglas Tompkins, Conservationist, and President of Foundation for Deep Ecology

"Inspired by John Muir's A Thousand-Mile Walk to the Gulf, John Davis walks, bikes, and kayaks on a 'voyage of recovery' from the Florida Keys to southeastern Canada. He bears witness not only to wilderness that still sustains bears, panthers, and bobcats but also to the possibilities for connecting further wildways in the eastern United States. His inspiring journey reminds us all that we must rediscover the wildness we still have before we lose it forever."
Michael Brune, Executive Director of the Sierra Club

"This account of a 'voyage of recovery'—a consecrated man's historic trek among the scattered protected lands harboring remnant biodiversity in the East—recalls Thoreau's acuity, self-drollery, and wisdom. John Davis's telling of his hopeful, muscle-powered survey of the once and future North American wilderness ground truths the fundamentals of conservation biology. It's a persuasive case for expanding, reconnecting, and rewilding, not just our preserves but ourselves."
Stephanie Mills, author of "Epicurean Simplicity" and "In Service of the Wild"

"Davis's honest recounting of his adventures, and short interviews with folks along the way make the reader feel like they too are walking, cycling, and paddling along with him. . . . Big, Wild and Connected will appeal to hikers, naturalists, and outdoor enthusiasts as well as students, professors, or practicing conservationists who wish to know what needs to happen to foster a North American East which can once again sustain widely roaming predators like panthers."
Wild Muse

Acknowledgments and Dedication
Introduction. Why I Chose the Wildway: Background to a Long Trek

About the Author
About Wildlands Network
About Island Press