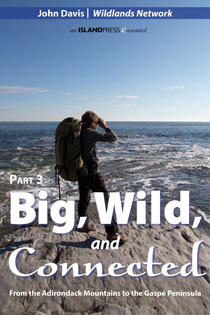 Part 3: From the Adirondack Mountains to the Gaspé Peninsula

This E-ssential is a three-part series that covers John Davis's epic journey from Florida to Maine. In 2011, with support from the Wildlands Network, Davis traveled 7,600 miles in 10 months from Florida to Maine by foot, bicycle, skis, and canoe/kayak. His extensive traveles were motivated by wanting to answer the question “Is it possible in the twenty-first century to identify and protect a continental-long wildlife corridor that could help to protect eastern nature into the future?”

John paints a vivid picture of the physical challenges of the trek, such as climbing the highest point in South Carolina with a heavily loaded bike and trying to consume the 8,000 calories per day he needed to fuel himself for the journey. As readers adventure with Davis, they will also share his evolving understanding of what it would take to implement an Eastern Wildway.

Eastern wildlife, both seen and unseen, from Florida panthers to North Carolina’s red wolves to the ghosts of cougars farther north, are the real focus of this adventure as John explores how such wildness can coexist with human development in the most populated regions of the United States. The science and conservation of large-scale connectivity are brought to life by his travels—offering unique insights into the challenges and opportunities for creating an Eastern Wildway. This is a must-read for enthusiasts of hiking narratives, as well as professionals and students interested in issues related to large-scale connectivity. Compelling photographs and other graphics complement John’s fascinating story.

Acknowledgments and Dedication
Introduction. Why Protect Wildways: Lessons Confirmed by TrekEast on the Importance of Wildlife Corridors

Chapter 9. Our Wildest Lands Are Not Wild Enough: Adirondack Park and Surrounds
Chapter 10. For Whom the Forest Works: Northern Appalachians and Maine Woods
Chapter 11. Where Salmon Still Spawn: Near-Boreal New Brunswick and Quebec
Chapter 12. Can We Get There From Here? Is an Eastern Wildway Still Possible?

About the Author
About Wildlands Network
About Island Press