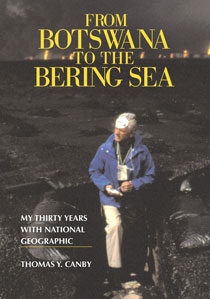 From Botswana to the Bering Sea

My Thirty Years With National Geographic

National Geographic has been called a window on the world and a passport to adventure. Each month an estimated forty million people in 190 countries open its pages and are transported to exotic realms that delight the eye and mind. Such widespread renown gives the magazine's writers an almost magical access to people and happenings, as doors that are closed to the rest of the journalistic world open wide.

Thomas Y. Canby was fortunate to be a NationalGeographic writer and science editor from 1961 to 1991, a time during which the Society's ventures and size grew by leaps and bounds and the resources available to staff were seemingly limitless. In From Botswana to the Bering Sea, he gives readers an on-the-ground look at the life of a National Geographic field staffer and an insider's view of the fascinating dynamics within the magazine's editorial chambers.

Canby's assignments dealt largely with issues of global concern, and his travels took him to the farthest reaches of the planet. This book gives the reader the visas and tickets to share in Canby's experiences -- from a Filipino rice harvest capped by a feast of deep-fried rats, to impoverished villages of Asia and Africa gripped by the world's most widespread famine, to seal hunting and dog sledding with Eskimos in the Canadian high Arctic. Readers match wits with paranoid guardians of the secret Soviet space program; skirt land mines in the flaming oil fields of Kuwait; and dodge death while scuba diving to an archaeological site in a Florida sinkhole. The book also gives insight into the magazine's inner workings: how article subjects are chosen; how writers are assigned and interact; how prolonged trips to impossibly remote destinations are planned; how staffers operate in the field.