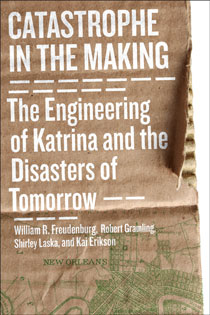 Catastrophe in the Making

The Engineering of Katrina and the Disasters of Tomorrow
That’

When houses are flattened, towns submerged, and people stranded without electricity or even food, we attribute the suffering to “

Review Quotes
re neither? What if we, as a society, are bringing these catastrophes on ourselves?
Contents
natural disasters”
References
acts of God.”
Awards
or “
Blogs

What will happen when thousands of people overwhelm communities?

Climate change is mostly a “slow onset” phenomenon.  It does, however, generate fast-onset disasters/catastrophes as well.  Multiple years of drought slowly debilitate the ecosystem, threaten crops growth and healthy forests that absorb rain when it comes. Wildfires fed by dead/dying plant growth destroy communities rapidly, thus leading to soil poised to contribute to mud slides, etc., etc.  The rhythm of the unexperienced and destructive dynamics of climate change play themselves out.

Similarly, human response will be both slow onset and rapid, interacting with one another.  The Louisiana Native American tribe of Isle de Jean Charles Biloxi/Chitamacha/Choctaw living on the fragile remaining land of coastal Louisiana has gone through these same “rhythms.” Their experiences give us more indication of what the climate change impacted human communities will experience.  With the waves of hurricanes that have struck the now tiny, mostly submerged island community, some tribal members, families, have left the island because the damage to their homes was too extensive, they were unable to afford repair or the challenges to get themselves and their children to and from the mainland to work and school proved too challenging.

This slow-onset out migration has reached a point at which the next step will be removal of the remaining tribal residents in one step of resettlement. The community, of strong Christian faith, pray that the resettlement is rapid and precedes another destructive hurricane event. Last January they received, as part of the application by the state of Louisiana to the U.S. Dept. of Housing and Urban Development National Disaster Resiliency Competition (NDRC), $52 million to resettle those remaining and to regather with them into the same new resettlement those who had already left in the earlier storm diasporas. The resettlement, some significant distance inland–perhaps up to 40 miles–will be a model community of best resilient practices as more and more small coastal communities along all three U.S. coasts confront sea level rise and need to imagine how migration inland can best be accomplished.

No sooner does the issue of resettlement (full communities) or relocation (individual families/households/neighborhoods) come to the fore of our thinking than the next questions must be answered:  Where are they going?  Will the new ecosystem be foreign to them and resistant to their traditional ways of earning a living, including coastal wildlife and seafood harvesting? Can those who move prepare themselves in advance, that is gain in resiliency in place that they can apply in their move?

Will the receiving communities be welcoming? Will they be able to provide the housing and all requisite community services for them?  Some 100,000 African Americans were driven from New Orleans by Katrina, not to return.  Many (estimated 40,000) settled in Houston and environs.  How did the City accommodate them? Was it a successful relocation?  Answers to these question are sparse, a missing effort that will be most noticed when the next large coastal diaspora occurs and inadequate knowledge has been accumulated to guide the outcome. The lesson is very clear:  not only must at-risk communities to climate change commit resources to adaptation to it, but likely receivers of residents from them, communities inland, communities in better geographies should be anticipating and preparing for receipt of the internal migrants.

Sadly, Louisiana is the locus of not only an anticipated successful resettlement but a failed one as well:  residents of New Orleans and coastal Louisiana whose homes were destroyed by Hurricane Katrina moved inland to communities along bayous on either side of Interstate-10 that were inundated by the August, 2016 31-inch rainfall catastrophe (160.000 homes flooded).  The case of these Louisianans twice severely impacted clearly suggests that successful relocation requires very careful study when it occurs and refinement of best practices for future successes.  Are we prepared to think so precisely in light our usual way of considering these as unexpected events that will just play themselves out?  The lesson is the same as the one we advise for anything related to climate change:  anticipate, investigate, refine, acknowledge best practices and be committed to implementing them.  No less is required for relocation engendered by climate change.

Shirley Laska, PhD is Professor Emerita of Sociology, University of New Orleans; founding past director of UNO-CHART–Center for Hazards Assessment, Response and Technology; co-founder of the Lowlander Center and co-author of Catastrophe in the Making with William Freudenburg, Bob Gramling and Kai Erikson.