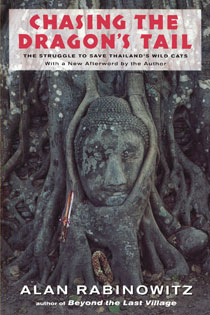 The Struggle to Save Thailand's Wild Cats

In 1987, zoologist Alan Rabinowitz was invited by the Thai government to study leopards, tigers, and other wildlife in the Huai Kha Khaeng valley, one of Southeast Asia's largest and most prized forests. It was hoped his research would help protect the many species that live in that fragile reserve, which was being slowly depleted by poachers, drug traffickers, and even the native tribes of the area. Chasing the Dragon's Tail is the remarkable story of Rabinowitz's life and adventures in the forest as well as the streets of Bangkok, as he works to protect Thailand's threatened wildlife.

Based on Rabinowitz's field journals, the book offers an intimate and moving look at a modern zoologist's life in the field. As he fights floods, fire-ant infestations, elephant stampedes, and a request to marry the daughter of a tribal chief, the difficulties that come with the demanding job of species conservation are dramatically brought to life. First published in 1991, this edition of Chasing the Dragon's Tail includes a new afterword by the author that brings the story up to date, describing the surprising strides Thailand has made recently in conservation.

Other titles by Alan Rabinowitz include Beyond the Last Village and Jaguar.

"...one of the best recent books on Thailand. Although essentially the record of a zoologist conserving wild cats in the Huai Kha Khaeng Wildlife Sanctuary, the book also offers a penetrating account of author Alan Rabinowitz's struggle to come to terms with Thailand and the Thai people."
Far Eastern Economic Review

Island Press grieves the loss of Alan Rabinowitz, Island Press author and dedicated wild cat scientist. Alan was a fierce conservationist who left an indelible mark on our world. His impact lives on through Island Press and his many contributions to the environmental community. We join Panthera in honoring Alan's memory. From Panthera:

The Board and staff of Panthera, the global wild cat conservation organization, mourn the loss of our co-founder and one of the world’s most visionary and widely admired wild cat scientists, Dr. Alan Robert Rabinowitz, who died today after a journey with cancer.

Panthera CEO and President, Dr. Fred Launay, stated, “The conservation community has lost a legend. Alan was a fearless and outspoken champion for the conservation of our planet’s iconic wild cats and wild places. As a lifelong voice for the voiceless, he changed the fate of tigers, jaguars and other at-risk species by placing their protection on the agendas of world leaders from Asia to Latin America for the very first time.”

Launay continued, “Inspiring a generation of young scientists, the boldness and passion with which Alan approached conservation was captivating and contagious. While we are devastated by his passing, we are comforted by the fact that his extraordinary legacy of advocacy for the most vulnerable creatures will live on in his legion of students and followers.”

Among a lengthy seminal list, some of his crowning conservation achievements are the conceptualization and implementation of Panthera’s Jaguar Corridor Initiative, an unprecedented effort to connect and protect jaguars from Mexico to Argentina, and the establishment of the world's first jaguar sanctuary in Belize. Forever in awe of the magnificence of the tiger – the world’s largest cat – Dr. Rabinowitz achieved victory after victory for the species, including the creation of the largest tiger reserve, the Hukaung Valley Tiger Reserve, in northern Myanmar.

Read more about the career of Alan Rabinowitz.


To share Alan's ideas and further his legacy, we offer 50% off the print and e-versions of all Alan's Island Press books:

An Indomitable Beast: The Remarkable Journey of the Jaguar.

Life in the Valley of Death: The Fight to Save Tigers in a Land of Guns, Gold, and Greed

Chasing the Dragon's Tail: The Struggle to Save Thailand's Wild Cats

Beyond the Last Village: A Journey of Discovery in Asia's Forbidden Wilderness

We also offer a free excerpt from Alan's most recent book, An Indomitable Beast: The Remarkable Journey of the Jaguar.