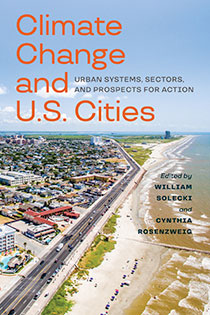 Approximately 80% of the U.S. population now lives in urban metropolitan areas, and this number is expected to grow significantly in the coming years. At the same time, the built infrastructure sustaining these populations has become increasingly vulnerable to climate change. Stresses to existing systems, such as buildings, energy, transportation, water, and sanitation are growing. If the status quo continues, these systems will be unable to support a high quality of life for urban residents over the next decades, a vulnerability exacerbated by climate change impacts. Understanding this dilemma and identifying a path forward is particularly important as cities are becoming leading agents of climate action.

Prepared as a follow-up to the Fourth National Climate Assessment (NCA), Climate Change and U.S. Cities documents the current understanding of existing and future climate risk for U.S. cities, urban systems, and the residents that depend on them. Beginning with an examination of the existing science since 2012, chapters develop connections between existing and emerging climate risk, adaptation planning, and the role of networks and organizations in facilitating climate action in cities. From studies revealing disaster vulnerability among low-income populations to the development of key indicators for tracking climate change, this is an essential, foundational analysis. Importantly, the assessment puts a critical emphasis on the cross-cutting factors of economics, equity, and governance.

Urban stakeholders and decision makers will come away with a full picture of existing climate risks and a set of conclusions and recommendations for action. Many cities in the United States still have not yet planned for climate change and the costs of inaction are great. With bold analysis, Climate Change and U.S. Cities reveals the need for action and the tools that cities must harness to effect decisive, meaningful change.