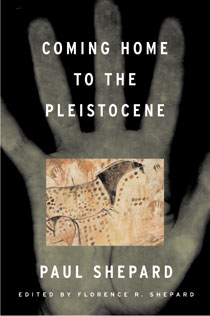 Coming Home to the Pleistocene

"When we grasp fully that the best expressions of our humanity were not invented by civilization but by cultures that preceded it, that the natural world is not only a set of constraints but of contexts within which we can more fully realize our dreams, we will be on the way to a long overdue reconciliation between opposites which are of our own making." --from Coming Home to the Pleistocene

Paul Shepard was one of the most profound and original thinkers of our time. Seminal works like The Tender Carnivore and the Sacred Game, Thinking Animals, and Nature and Madness introduced readers to new and provocative ideas about humanity and its relationship to the natural world. Throughout his long and distinguished career, Paul Shepard returned repeatedly to his guiding theme, the central tenet of his thought: that our essential human nature is a product of our genetic heritage, formed through thousands of years of evolution during the Pleistocene epoch, and that the current subversion of that Pleistocene heritage lies at the heart of today's ecological and social ills.

Coming Home to the Pleistocene provides the fullest explanation of that theme. Completed just before his death in the summer of 1996, it represents the culmination of Paul Shepard's life work and constitutes the clearest, most accessible expression of his ideas. Coming Home to the Pleistocene pulls together the threads of his vision, considers new research and thinking that expands his own ideas, and integrates material within a new matrix of scientific thought that both enriches his original insights and allows them to be considered in a broader context of current intellectual controversies. In addition, the book explicitly addresses the fundamental question raised by Paul Shepard's work: What can we do to recreate a life more in tune with our genetic roots? In this book, Paul Shepard presents concrete suggestions for fostering the kinds of ecological settings and cultural practices that are optimal for human health and well-being.

Coming Home to the Pleistocene is a valuable book for those familiar with the life and work of Paul Shepard, as well as for new readers seeking an accessible introduction to and overview of his thought.

Preface
Introduction
PART I.  The Relevance of the Past
- Our Pleistocene ancestors and contemporary hunter/gatherers cannot be understood in a historical context that, as a chronicle of linear events, has distorted the meaning of the "savage" in us.
PART II. Getting a Genome
- Being human means having evolved—especially with respect to a special past in open country, where the basic features that make us human came into being. Coming down out of the trees, standing on our own two feet, freed our hands and brought a perceptual vision never before seen on the planet.
PART III. How We Once Lived
- For a hundred thousand years or more our ancestors worked out a way of life at peace with their world. Although their economy was one of hunting and gathering, the special meaning of that way must be understood anew if we are to learn by their example.
PART IV. How the Mind Once Lived
- The great puzzle of our species is how we got so smart. The answer is that we joined the great foraging network—the game of prey and predator—and participated in the complex, competitive strategies that brought with them the ability to think ahead, consider our actions, and develop the capacity for metaphor.
PART V. Savages Again
- Removing the historical lens brings primitive society into clear sight in the present—not as a past but as the basic human context. Modern studies of hunter/gatherers reveal our cultural distance from them while at the same time defining optimum ways of being human.
PART VI. Romancing the Potato
- The idealism of domestication is like other ideologies that have arisen in history—a blanket repudiation of anything prehistoric except as the concrete model of inferiority. Agrarian power and the domestication of plants and animals brought consequences that were not only practical but also profoundly psychopathic for all succeeding generations.
PART VII. The Cowboy Alternative
- The other course that domestication opened to us was the herding of hoofed animals. This route took its toll not only in the ravagement of the earth by overgrazing but also in its otherworldly and patriarchal orientation, which was hostile to women, nature, and Planet Earth.
PART VIII. Wildness and Wilderness
- Wildness is a genetic state of an organism or a natural population, an intrinsic human condition, and the basis for the species and complexity of the biosphere. Wilderness is a place we have dedicated to wildness, both in ourselves and in other species. Seen as landscape, wilderness is intrinsically distancing—a science or art form that reduces nature to representations.
PART IX. The New Mosaic—A Primal Closure
- How can we make use of an admirable "past" to which access seems blocked by time and progress? The dilemma disappears when we realize that culture, like the genome and the ecosystem, is a mosaic of removable parts that can be reintegrated into our present. We can go back to the Pleistocene because, as a species, we never left. And by
identifying characteristic aspects of the lives of our ancestors and contemporary hunter/gatherers, our modern culture can absorb these features in its own way.
Bibliography
Index