Skip to main content
Home   /   Books   /   From Conquest to Conservation 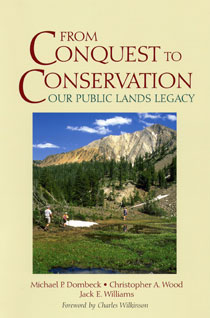 From Conquest to Conservation

From Conquest to Conservation is a visionary new work from three of the nation’s most knowledgeable experts on public lands. As chief of the Forest Service, Mike Dombeck became a lightning rod for public debate over issues such as the management of old-growth forests and protecting roadless areas. Dombeck also directed the Bureau of Land Management from 1994 to 1997 and is the only person ever to have led the two largest land management agencies in the United States. Chris Wood and Jack Williams have similarly spent their careers working to steward public resources, and the authors bring unparalleled insight into the challenges facing public lands and how those challenges can be met.

Here, they examine the history of public lands in the United States and consider the most pressing environmental and social problems facing public lands. Drawing heavily on fellow Forest Service employee Aldo Leopold’s land ethic, they offer specific suggestions for new directions in policy and management that can help maintain and restore the health, diversity, and productivity of public land and water resources, both now and into the future.

Also featured are lyrical and heartfelt essays from leading writers, thinkers, and scientists— including Bruce Babbitt, Rick Bass, Patricia Nelson Limerick, and Gaylord Nelson—about the importance of public lands and the threats to them, along with original drawings by William Millonig.

"Drawing upon their experiences as agency insiders, Michael Dombeck, Christopher Wood, and Jack Williams bring not only a wealth of experience and insights to the task, but a refreshing sense of candor and openness about the internal conflicts, competing interests, and contradictions in the federal agencies charged with managing our public lands in From Conquest to Conservation."
Natural Resources Journal

Chapter 1. All the People's Land: The Wealth of the Nation Public Lands: An American Birthright

Chapter 2. Controversy Comes to the Public Lands Birds and Battlefields and Humor: Things Could Be a Lot Worse

Chapter 3. Land Health: Broad-Scale Declines in Forest and Rangeland Conditions
-Radical Changes in a Sagebrush
-Landscape: The Role of Exotic Cheatgrass in Disrupting a System

Chapter 5. Roadless Areas: The Last Wild Places
-A Dream for Healing the Kootenai
-The Heart of the West: BLM's National Landscape Conservation System

Chapter 6. Restoration: Healing the Land and Healing Ourselves
-The Once and Future Land Ethic

Chapter 8. The Upshot: Conservation Challenges for a New Century
-Bringing People and Conservation Together: The Future Constituency for Public Lands
-Enduring Values of Our Public Lands: Peace, Wildness, and Beauty

Notes
About the Authors
Index

From Conquest to Conservation was a finalist in the 2004 Benjamin Franklin Award's Science/Environment category.