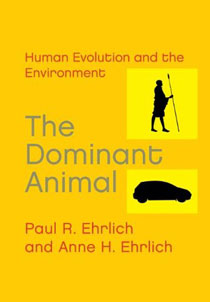 Human Evolution and the Environment

In humanity’s more than 100,000 year history, we have evolved from vulnerable creatures clawing sustenance from Earth to a sophisticated global society manipulating every inch of it. In short, we have become the dominant animal. Why, then, are we creating a world that threatens our own species? What can we do to change the current trajectory toward more climate change, increased famine, and epidemic disease?

Renowned Stanford scientists Paul R. Ehrlich and Anne H. Ehrlich believe that intelligently addressing those questions depends on a clear understanding of how we evolved and how and why we’re changing the planet in ways that darken our descendants’ future. The Dominant Animal arms readers with that knowledge, tracing the interplay between environmental change and genetic and cultural evolution since the dawn of humanity. In lucid and engaging prose, they describe how Homo sapiens adapted to their surroundings, eventually developing the vibrant cultures, vast scientific knowledge, and technological wizardry we know today.

But the Ehrlichs also explore the flip side of this triumphant story of innovation and conquest. As we clear forests to raise crops and build cities, lace the continents with highways, and create chemicals never before seen in nature, we may be undermining our own supremacy. The threats of environmental damage are clear from the daily headlines, but the outcome is far from destined. Humanity can again adapt—if we learn from our evolutionary past.

Those lessons are crystallized in The Dominant Animal. Tackling the fundamental challenge of the human predicament, Paul and Anne Ehrlich offer a vivid and unique exploration of our origins, our evolution, and our future.

"No one has more authority to write on these matters than the husband-and-wife team of Stanford biologists Paul and Anne Ehrlich. For decades now they have been documenting and warning of humans' effects on the environment. Their new book, The Dominant Animal, continues their chronicle of the damage we have done to our home…. This is an important book,with much information and some really stimulating ideas. We need to build on these ideas, because the world is in an environmental mess and things are not getting better."
Washington Post

"…The Dominant Animal tells the story of how mankind came to dominate nearly every inch of the earth. [It] spans the entire history of the world, weaving both cultural and biological evolution into the ambitious narrative. At its core are timely questions we would all do well to consider: Is it in our best interest to dominate Earth? Are we creating a future we want to live in?"
Plenty

"Alpha male and female of contemporary science ... the Ehrlichs convey a message at once chilling and hopeful…. The big ideas and the tenor of The Dominant Animal are right on. The book rejects starry eyed insistence on new technology as humankind's savior in favor of socially responsible, if admittedly difficult-to-enact, prescriptions."
SEED Magazine

"Their latest book, The Dominant Animal: Human Evolution and the Environment, continues to drum home the message that humans are on a collision course with ecological catastrophe. But what's new and notable is the dual biological and cultural lens the Ehrlichs use to diagnose the underlying cause of our predicament... the book left me wanting more—hungry for revolutionary new insights whose very existence would shine the right way forward. If we'd listened to Ehrlich 40 years ago, perhaps we'd already be on that path."
Audubon

"Covering a vast swathe of disciplines, from genetics, evolution and ecology to climatology, economics and global politics, the book almost reads like a primer for the concerned citizen.... This marvellous compendium should be required reading."
New Scientist

"The Ehrlichs, in The Dominant Animal, cover an enormous amount of scientific ground in looking at both the big picture in terms of environmental dangers and challenges while also offering detailed explanations of how humans have evolved, both genetically and culturally, within our environment. The book relates precise science in easily understandable terms."
Palo Alto Weekly

"Buy this for your next seminar class.... or be inspired and make an undergraduate course out of it...Yes, you've read some of this before, but not all of it, and not told so well, or with such passion and humor."
Trends in Ecology & Evolution

"One of the essential books of 2008.... The Ehrlichs walk you through a basic course in evolution and genetics before moving into a cultural evolution and its devastating impact on ecosystems, worldwide."
Nuvo Weekly

"In The Dominant Animal, the Ehrlichs step back and analyse the big picture, looking carefully at how humans have evolved to dominance and, in the process, are laying waste the planet. Their message is that our technological advances aren't matched by how well we treat one another or the environment around us."
Vancouver Sun

"Imagine a UN Millennium Assessment of Human Behavior! This an important and sobering work…"
Shift

"Is there an armchair scientist on your gift list? Then you can't go wrong with The Dominant Animal: Human Evolution and the Environment by Paul R. Ehrlich and Anne H. Ehrlich. This fascinating book is not for a lightweight; it's filled with hypotheses, insight and ideas for thinkers. This is a perfect gift for someone who loves to study culture, but will also be a great for anyone who's trying to 'go green' this year."
Eagle Tribune

"This sparkling book is a great guide to what's essential about humans, the world, and how they affect each other. Along the way, you'll pick up delicious tidbits such as what Mussolini's basic problem was, and why we are so sure that tiny sequoia seeds grow into 300-foot sequoia trees even though no one has ever seen it happen."
Jared Diamond, Professor of Geography at UCLA and author of "Collapse" and "Guns, Germs, and Steel"

"No other scientific couple could produce a book of this brilliance on where we came from and where we're going. The Ehrlichs, who have been at the cutting edge of the science, have interwoven evolutionary history and our environmental dilemma into a compelling and vital story."
John P. Holdren, Director, The Woods Hole Research Center

"This is a grand tour of the current state of ecological science, and a tour de force of observation, insight, and suggestion."
Bill McKibben, author of "The Bill McKibben Reader"

"This is a brilliant and fascinating account of how we became the planet's ruling species and now the major force determining the future of evolution. The Ehrlichs' broad perspective and lucid prose bring fresh understanding to what's going on in the world today. Everyone should read this book."
Peter H. Raven, President, Missouri Botanical Garden

Chapter 1. Darwin's Legacy and Mendel's Mechanism
Chapter 2. The Entangled Bank
Chapter 3. Fossils and Our Distant Past
Chapter 4. Cultural Evolution – It's Not All in the Genes
Chapter 5. Cultural Evolution: How It Works
Chapter 6. Perception: How Much Of The Outside Gets In?
Chapter 7. Differences: How We Deal with Them
Chapter 8. Births, Deaths, and Migrations: The Dynamics of Populations
Chapter 9. History as Cultural Evolution
Chapter 10. Cultural Change, Diversification, and Conservatism
Chapter 11. Our Biophysical Environment
Chapter 12. Ecosystems and Human Domination of Earth
Chapter 13. Population, Consumption, and the Environment
Chapter 14. A New Imperative
Chapter 15. Altering the Global Atmosphere
Chapter 16. Energy: Are We Running Out of It?
Chapter 17. Saving Our Natural Capital
Chapter 18. Governance: Tackling the Unanticipated Consequences