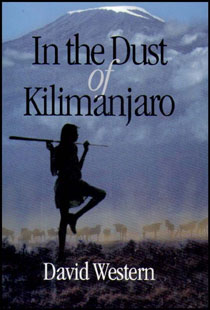 In the Dust of Kilimanjaro

"Kilimanjaro slowly takes shape as the night sounds die, its glaciated peak tinged pink in the early light. A solitary wildebeest stares motionless as if mesmerized by the towering mass; a small caravan of giraffe drifts across the plain in solitary file, necks undulating to the slow rhythm of their gangling stride. There is an inexplicable deja vu about the African savannas, as if some subliminal memory is tweaked by the birthplace of our hominid lineage." --from In the Dust of Kilimanjaro

In the Dust of Kilimanjaro is the extraordinary story of one man's struggle to protect Kenya's wildlife. World-renowned conservationist David Western -- who grew up in Africa and whose life is intertwined with the lives of its animals and indigenous peoples -- presents a history of African wildlife conservation and an intimate glimpse into his life as a global spokesperson and one of Kenya's most prominent citizens.

Beginning with his childhood adventures hunting in rural Tanganyika (now Tanzania), Western describes how and why the African continent came to hold such power over him. In lyrical prose, he recounts the years of solitary fieldwork in and around Amboseli National Park that led to his gradual awakening to what was happening to the animals and people there. His immersion in the culture and ecology of the region made him realize that without an integrated approach to conservation, one that involved people as well as animals, Kenya's most magnificent creatures would be lost forever.

His accounts of his friendships with the Maasai add a personal dimension to the book that gives the reader new appreciation for the centuries-old links between Africa's wildlife and people. Continued coexistence rather than segregation, he argues, offers the best hope for the world's wildlife. Western describes how his unique understanding of the potentially devastating problems in the region helped him pioneer a new approach to global wildlife conservation that balances the needs of people and wildlife without excluding one or the other.

More than an exceptional autobiography, In the Dust of Kilimanjaro is a riveting look at local and global efforts to preserve species and protect ecosystems. It is the definitive story of wildlife conservation in Africa with a strong and timely message about co-existence between humans and animals.

PART I. Vanishing Worlds
Chapter 1. Dreams of a Hunter
Chapter 2. First They Took Our Animals, Then Our Land

PART II. Savanna Rhythms
Chapter  3. Amboseli
Chapter 4. The Pulse of an Ecosystem
Chapter 5. The Illmodiok War
Chapter 6. In the Dust of Kilimanjaro

PART III. Through the Eyes of a Cow
Chapter 7. Not One More Inch
Chapter 8. Drought
Chapter 9. A Break in the Weather
Chapter 10. Changing Worlds