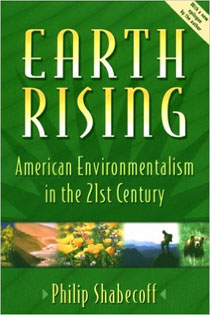 American Environmentalism In The 21St Century

"The mission of environmentalism is to mobilize society at all levels to confront the danger and disorder into which human activity has propelled us and guide us to a safer, saner way of living on the planet.... Environmentalism has never been about catastrophe. It is about alternatives, about changing course, about transforming the future." --Philip Shabecoff, from Earth Rising

Philip Shabecoff, America's preeminent environmental journalist, has spent more than two decades thinking and writing about the environment and related subjects, as a reporter for The New York Times, as publisher of Greenwire, and as the author of two books, including the critically acclaimed A Fierce Green Fire. In Earth Rising, he draws on that experience to offer a pointed and thought-provoking critique of the current state and future prospects of the American environmental movement.

Based on extensive interviews with a wide range of individuals both within and outside of the movement, Shabecoff elucidates the issues and problems confronting today's environmentalists and analyzes the movement's strengths and weaknesses. Viewing environmental threats as symptoms of flaws in our society and its systems, he considers the urgent need for a broader, more inclusive environmentalism, and examines the role environmentalists can -- and must -- play in:

Throughout, Shabecoff emphasizes the need for national organizations to link together with grassroots groups and to become more responsive to local concerns, and argues that the environmental movement has not yet adequately prepared itself to meet current and coming challenges. He makes a compelling case that another wave of environmentalism is needed -- more powerful, diverse and sophisticated, visionary and flexible. Earth Rising offers a detailed road map that can guide environmentalists toward that new and reenergized place in society.