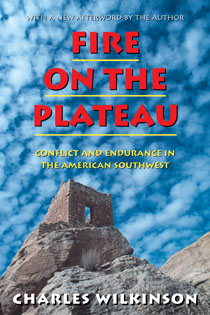 Fire on the Plateau

Conflict And Endurance In The American Southwest

"This book recounts my journey through the Colorado Plateau, a journey through place and time and self.... During my explorations of more than three decades, I found a land that sears into my heart and soul, a place that has taught me and changed me. I also discovered a land of conflict and endurance, a land that has given birth to one of the great chapters in American history." --from the Introduction

The Colorado Plateau, stretching across four states and covering nearly 80 million acres, is one of the most unique and spectacular landscapes in the world. Remote, rugged, and dry -- at once forlorn and glorious -- it is a separate place, a place with its own distinctive landscape, history, and future.

In Fire on the Plateau, legal scholar and writer Charles Wilkinson relates the powerful story of how, over the past thirty years, he has been drawn ever more deeply into the redrock country and Indian societies of the Colorado Plateau. His work in the early 1970s as staff attorney for the newly formed Native American Rights Fund brought him into close contact with Navajo and Hopi people. His growing friendships with American Indians and increasing understanding of their cultures, along with his longstanding scholarship and experiences on federal public lands, led him to delve into the complicated history of the region.

Wilkinson examines that history -- the sometimes violent conflicts between indigenous populations and more recent settlers, the political machinations by industry and the legal establishment, the contentious disputes over resources and land use -- and provides a compelling look at the epic events that have shaped the region. From centuries of habitation by native peoples to Mormon settlement, from the "Big Build-Up" of the post-World War II era to the increased environmental awareness of recent years, he explores the conquests of tribes and lands that have taken place, and the ways in which both have endured.

Throughout, Wilkinson uses his own personal experiences as a lawyer working with Indian people and his heartfelt insights about a land that he grew to love to tie together the threads of the story. Fire on the Plateau is a vital and dynamic work that is sure to strike a chord with anyone interested in the past or future of the American Southwest.

Notes
Acknowledgments
About the Author
Index