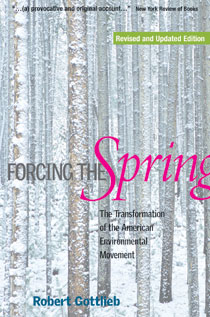 The Transformation of the American Environmental Movement

Originally published in 1993, Forcing the Spring was quickly recognized as a seminal work in the field of environmental history. The book links the environmental movement that emerged in the 1960s to earlier movements that had not previously been defined as environmental. It was the first to consider the importance of race, ethnicity, class, and gender issues in the history and evolution of environmentalism.

This revised edition extends the groundbreaking history and analysis of Forcing the Spring into the present day. It updates the original with important new material that brings the book's themes and arguments into the 21st century, addressing topics such as: the controversy spawned by the original edition with regard to how environmentalism is, or should be, defined; new groups and movements that have formed in the past decade; change and development in the overall environmental movement from 1993 to 2004; the changing role of race, class, gender, and ethnicity in today's environmentalism; the impact of the 2004 presidential election; the emergence of "the next environmentalism."

Forcing the Spring, Revised Edition considers environmentalism as a contemporary movement focused on "where we live, work, and play," touching on such hot-button topics as globalization, food, immigration, and sprawl. The book also describes the need for a "next environmentalism" that can address current challenges, and considers the barriers and opportunities associated with this new, more expansive approach.

Forcing the Spring, Revised Edition is an important contribution for students and faculty in a wide variety of fields including history, sociology, political science, environmental studies, environmental history, and social movements. It also offers useful context and analysis for anyone concerned with environmental issues.

"Forcing the Spring … is an important work, providing for general readers as well as specialists the background to an emergent way of thinking that goes beyond activism to define values that have quietly begun to affect politics and society at all levels."
Christian Science Monitor

PART I. Complex Movements, Diverse Roots: Revisionist Histories, Revised Edition
Chapter 1. Resources and Recreation: The Limits of the Traditional Debate
Chapter 2. Urban and Industrial Roots: Seeking to Reform the System
Chapter 3. The Sixties Rebellion:" The Search for a New Politics 121

PART III. Issues of Gender, Ethnicity, and Class: A White Male Upper-Class Movement? Revised Edition
Chapter 6. Gender and Place: Women and Environmentalism
Chapter 7. Ethnicity as a Factor: The Quest for Environmental Justice
Chapter 8. A Question of Class: The Workplace Experience