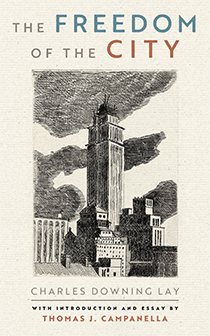 The Freedom of the City

Charles Downing Lay, with an introduction and essay by Thomas J. Campanella

“Congestion is the life of the city . . . it is what we came for, what we stay for, what we hunger for”, wrote Charles Downing Lay, prominent American landscape architect and planner of the early 1920s. These words are relevant today as density and congestion are once again under siege, especially in our most productive and thriving cities.

Published in 1926, The Freedom of the City by Charles Downing Lay is an eloquent and timely defense of urbanism and city life. Award-winning author and urban historian Thomas J. Campanella has given Lay’s text new life and relevance, with the addition of explanatory notes, imagery, an introduction, and biographical essay, to bring this important work to a new generation of urbanists.

Lay was decades ahead of his time, writing The Freedom of the City as Americans were just beginning to fall in love with the automobile and leave town for a romanticized life on the suburban fringe. Planners and theorists were arguing that heavily congested cities were a form of cancer, that great metropolitan centers like London and New York City must be decanted into a leafy “garden cities” in the countryside. Lay saved his sharpest pen for these anti-urbanists in his own profession of city and regional planning.

Lay writes of the delights of city life and—especially—that importance of the singular, essential ingredient that makes it all possible: “congestion” (closest in definition to “density” today). Congestion, to Lay, is the secret sauce of cities, the singular element that gives London, Paris, or New York its dynamism and magic. He believed that the amenities and affordances of a city are “the direct result of its great congestion”; indeed, congestion is “the life of the city. Reduce it below a certain point and much of our ease and convenience disappears.

Campanella writes “for all his blind spots, Lay's core argument still obtains. The Freedom of the City was prescient in 1926 and timely now. Certainly, the essentials of good urbanism extolled in the book—human scale, diversity, walkability, the serendipities of the street; above all, density—are articles of faith among architects and urbanists today.”