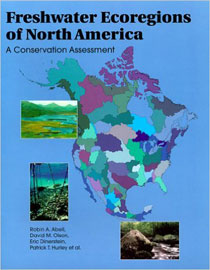 North America's freshwater habitats and the extraordinary biodiversity they contain are facing unprecedented threats from a range of sources, including flow alteration, habitat fragmentation, introduced species, and overall land use changes. With nearly every freshwater system suffering from some degree of degradation and conservation resources limited, there is an urgent and practical need to set priorities.

As an initial step in identifying those areas where protective and restorative measures should be implemented first, World Wildlife Fund-US assembled a team of leading scientists to conduct a conservation assessment of freshwater ecoregions. Freshwater Ecoregions of North America presents that assessment and outlines measures that must be taken to conserve, and in many cases restore, native biodiversity. The book:

In addition, it offers appendixes that provide detailed descriptions of methodologies, raw scores and statistical analysis of results, and an integrated biological distinctiveness and conservation status index. Also included are 21 full-color maps.