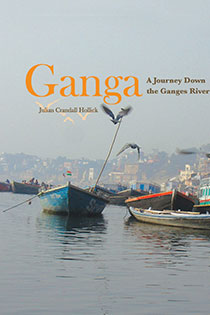 A Journey Down the Ganges River

The Ganges has always been more than just an ordinary river. For millions of Indians, she is also a goddess. According to popular belief, bathing in “Mother Ganga” dissolves all sins, drinking her waters cures illness, and dying on her banks ensures freedom from the cycle of death and rebirth.

Yet there remains a paradox: while Ganga is worshipped devotedly, she is also exploited without remorse. Much of her water has been siphoned off for irrigation, toxic chemicals are dumped into her, and dams and barrages have been built on her course, causing immense damage. Ganga is in danger of dying—but if the river dies, will the goddess die too?

The question took journalist Julian Crandall Hollick on an extraordinary journey through northern India: from the river’s source high in the Himalayas, past great cities and poor villages, to lush Saggar Island, where the river finally meets the sea. Along the way he encounters priests and pilgrims, dacoits and dolphins, the fishermen who subsist on the river, and the villagers whose lives have been destroyed by her. He finds that popular devotion to Ganga is stronger and blinder than ever, and it is putting her—and her people—in great risk.

Combining travelogue, science, and history, Ganga is a fascinating portrait of a river and a culture. It will show you India as you have never imagined it.

"This book is the ideal fellow passenger—open and informative, chatty and beguiling, a voice for the masses on the shores."
Chicago Tribune