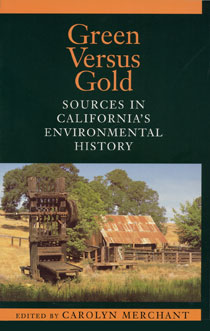 While the state of California remains one of the most striking and varied landscapes in the world, it has experienced monumental changes since European settlers first set foot there. The past two centuries have witnessed an ongoing struggle between environment and economy, nature and humanity that has left an indelible mark on the region.

Green Versus Gold provides a compelling look at California's environmental history from its Native American past to conflicts and movements of recent decades. Acclaimed environmental historian Carolyn Merchant has brought together a vast storehouse of primary sources and interpretive essays to create a comprehensive picture of the history of ecological and human interactions in one of the nation's most diverse and resource-rich states.

For each chapter, Merchant has selected original documents that give readers an eyewitness account of specific environments and periods, along with essays from leading historians, geographers, scientists, and other experts that provide context and analysis for the documents. In addition, she presents a list of further readings of both primary and secondary sources. Among other topics, chapters examine:

California's natural environment and Native American lands the Spanish and Russian frontiers environmental impacts of the gold rush the transformation of forests and rangelands agriculture and irrigation cities and urban issues the rise of environmental science and contemporary environmental movement.

Merchant's informed and well-chosen selections present a unique view of decades of environmental change and controversy. Historians, educators, environmentalists, writers, students, scientists, policy makers, and others will find the book an enlightening and important contribution to the debate over our nation's environmental history.

Table of Figures
Introduction: The Fate of Nature in the Golden State