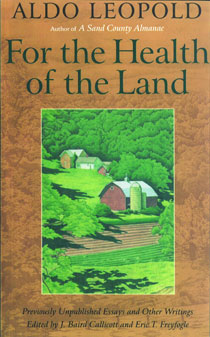 For the Health of the Land

Previously Unpublished Essays And Other Writings

Aldo Leopold's classic work A Sand County Almanac is widely regarded as one of the most influential conservation books of all time. In it, Leopold sets forth an eloquent plea for the development of a "land ethic" -- a belief that humans have a duty to interact with the soils, waters, plants, and animals that collectively comprise "the land" in ways that ensure their well-being and survival.

For the Health of the Land, a new collection of rare and previously unpublished essays by Leopold, builds on that vision of ethical land use and develops the concept of "land health" and the practical measures landowners can take to sustain it. The writings are vintage Leopold -- clear, sensible, and provocative, sometimes humorous, often lyrical, and always inspiring. Joining them together are a wisdom and a passion that transcend the time and place of the author's life.

The book offers a series of forty short pieces, arranged in seasonal "almanac" form, along with longer essays, arranged chronologically, which show the development of Leopold's approach to managing private lands for conservation ends. The final essay is a never before published work, left in pencil draft at his death, which proposes the concept of land health as an organizing principle for conservation. Also featured is an introduction by noted Leopold scholars J. Baird Callicott and Eric T. Freyfogle that provides a brief biography of Leopold and places the essays in the context of his life and work, and an afterword by conservation biologist Stanley A. Temple that comments on Leopold's ideas from the perspective of modern wildlife management.

The book's conservation message and practical ideas are as relevant today as they were when first written over fifty years ago. For the Health of the Land represents a stunning new addition to the literary legacy of Aldo Leopold.

PART I. Conserving Rural Wildlife
-Game Management: A New Field for Science
-Helping Ourselves: Being the Adventures of a Farmer and a Sportsman Who Produced Their Own Shooting Ground
-The Wisconsin River Marshes
-Coon Valley: An Adventure in Cooperative Conservation
-Farm Game Management in Silesia
-Be Your Own Emperor

PART III. Conservation and Land Health
-The Farmer as a Conservationist
-History of the Riley Game Cooperative, 1931-1939
-Planning for Wildlife
-Biotic Land-Use
-What Is a Weed?
-The Outlook for Farm Wildlife
-The Land-Health Concept and Conservation

Afterword by Stanley A. Temple
Acknowledgments
Editors' Notes
About the Contributors