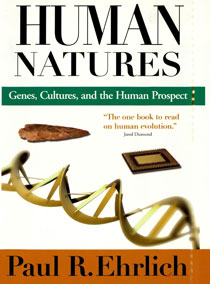 Genes, Cultures, and the Human Prospect

The Bell Curve, The Moral Animal, The Selfish Gene -- these and a host of other books and articles have made a seemingly overwhelming case that our genes determine our behavior. Now, in a new book that is sure to stir controversy, one of the world's leading evolutionary biologists shows why most of those claims of genetic destiny cannot be true, and explains how the arguments often stem from a fundamental misunderstanding of evolution itself.

"You can't change human nature," the saying goes. But you can, Stanford biologist Paul Ehrlich shows us in Human Natures, and in fact, evolution is the story of those changing natures. He makes a compelling case that "human nature" is not a single, unitary entity, but is as diverse as humanity itself, and that changes in culture and other environmental variations play as much of a role in human evolution as genetic changes. We simply don't have enough genes to specify behavior at the level that is often asserted.

Never has knowledge of our evolutionary past been more important to our future. Developing intelligent strategies for antibiotic use, pest control, biodiversity protection -- and even for establishing more equitable social arrangements -- all depend on understanding evolution and how it works. A hallmark of Human Natures is the author's ability to convey lucidly that understanding in the course of presenting an engrossing history of our species. Using personal anecdote, vivid example, and stimulating narrative, Ehrlich guides us through the thicket of controversies over what science can and cannot say about the influence of our evolutionary past on everything from race to religion, from sexual orientation to economic development.

A major work of synthesis and scholarship, Human Natures gives us the fruit of a lifetime's thought and research on evolution and environment by a modern master of scientific understanding. Ehrlich's innovative vision lights the way to a fresh view of human nature and evolution, bringing insight and clarity to urgent questions of where we are as a species, and where we may be headed.

Chapter 1. Evolution and Us
Chapter 2. Tales From the Animal House
Chapter 3. Our Natures and Theirs
Chapter 4. Standing Up For Ourselves Bare Bones and a Few Stones
Chapter 6. Evolving Brains, Evolving Minds
Chapter 7. From Grooming to Gossip?
Chapter 8. Blood's a Rover
Chapter 9. The Dominance of Culture
Chapter 10. From Seeds to Civilization
Chapter 11. Gods, Dive-Bombers, and Bureaucracy
Chapter 12. Lessons from Our Natures
Chapter 13. Evolution and Human Values

Human Natures was a finalist for the 2001 Independent Publisher Book Awards in the science category.