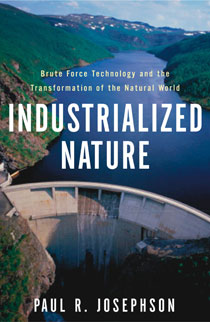 Brute Force Technology and the Transformation of the Natural World

The construction of the Three Gorges Dam on China's Yangtze River. The transformation of the Amazon into a site for huge cattle ranches and aluminum smelters. The development of Nevada's Yucca Mountain into a repository for nuclear waste. The extensive irrigation networks of the Grand Coulee and Kuibyshev Dams. On the face of it, these massive projects are wonders of engineering, financial prowess, and our seldom-questioned ability to modify nature to suit our immediate needs. For nearly a century we have relied increasingly on science and technology to harness natural forces, but at what environmental and social cost?

In Industrialized Nature, historian Paul R. Josephson provides an original examination of the ways in which science, engineering, policy, finance, and hubris have come together, often with unforeseen consequences, to perpetuate what he calls "brute-force technologies"—the large-scale systems created to manage water, forest, and fish resources. Throughout the twentieth century, nations with quite different political systems and economic orientations all pursued this same technological subjugation of nature. Josephson compares the Soviet Union's heavy-handed efforts at resource management to similar projects undertaken in the United States, Norway, Brazil, and China. He argues that brute-force technologies require brute-force politics to operate. He shows how irresponsible—or well-intentioned but misguided—large-scale manipulation of nature has resulted in resource loss and severe environmental degradation.

Josephson explores the ongoing industrialization of nature that is happening in our own backyards and around the world. Both a cautionary tale and a call to action, Industrialized Nature urges us to consider how to develop a future for succeeding generations that avoids the pitfalls of brute-force technologies.