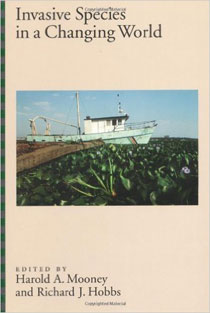 Invasive Species in a Changing World

Edited by Harold A. Mooney and Richard J. Hobbs

Changing patterns of global commerce are leading to the breakdown of biogeographic barriers that have historically kept the floras and faunas of different continents separate. Some introduced species not only take hold in their new foreign habitat but also become aggressive; these -- invasives -- can exact a serious toll on ecosystem diversity and processes. Global changes -- including changes in atmospheric composition, land use patterns,and fire regimes -- are likely to foster the success of invaders in coming decades.

Invasive Species in a Changing World brings together leading scientists from around the world -- including Carla M. D'Antonio, Jeffrey McNeely, Robert Sutherst, David Richardson, and others -- to examine the invasive species phenomenon and to consider the mutual interactions between global change and invasives that are likely to occur over the next century. Invasive Species in a Changing World: offers a comprehensive look at the status of freshwater, marine, and terrestrial ecosystems in relation to invasives; examines physical factors that will influence the future success ofinvading species; considers the tools available to track changing patterns and movements; looks at human dimensions including human health effects, and effects on crops; describes the problem in different parts of the world.

Contributors focus on the proposition that global change will exacerbate the invasive species problem, and set forth the idea that invasives are themselves a global change element that need to be considered in global change scenarios.

Invasive Species in a Changing World provides readers with the background and knowledge they need to begin developing strategies to combat the invasive species problem, and is essential reading for anyone concerned with the impact of invasive species on ecosystem health and functioning.

PART IV: Summary
Chapter 17. Global Change and Invasive Species: Where Do We Go From Here?