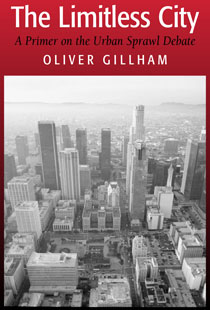 A Primer on the Urban Sprawl Debate

One of the great debates of our time concerns the predominant form of land use in America today -- the all too familiar pattern of commercial and residential development known as sprawl. But what do we really know about sprawl? Do we know what it is? Where did it come from? Is it really so bad? If so, what are the alternatives? Can anything be done to make it better? The Limitless City offers an accessible examination of those and related questions. Oliver Gillham, an architect and planner with more than twenty-five years of experience in the field, considers the history and development of sprawl and examines current debates about the issue. The book:

The author argues that whether we like it or not, sprawl is here to stay, and only by understanding where it came from and why it developed will we be able to successfully address the problems it has created and is likely to create in the future. The Limitless City is the first book to provide a realistic look at sprawl, with a frank recognition of its status as the predominant urban form in America, now and into the near future. Rather than railing against it, Gillham charts its probable future course while describing critical efforts that can be undertaken to improve the future of sprawl and our existing urban core areas.
Review Quotes

"If you plan to read only one book to understand the terms of the debate, this should be it."
Harvard Design

"Policy makers would do well to keep The Limitless City within reach."
Boston Globe